I’ll be having another article dealing with one of my sites and NewsGuard’s “Nutrition Labeling” later this week.  However, just as I exited a phone conversation with NewsGuard Executive Director Eric Effron regarding the libel and lack of truthful “reporting” of the label, I discovered that NewsGuard is continuing to provide a clean bill of health to sites that are running with proven hoaxes as actual news stories, including the Jussie Smollet case.

Now, look, anyone can get NewsGuard’s little app and put it on your browser and see what they have to say about sites they’ve rated, and if you don’t want that and you use Microsoft browsers of their search engine, Microsoft will peddle their wares to you.

However, Breitbart, whom NewsGuard has also given a red badge indicating that it “fails to meet several basic standards of credibility and transparency,” just put out a report in which they claim, “Microsoft is so desperate to spread fake news and blacklist ideas it doesn’t like, NewsGuard is automatically included in one of its browsers.”

And what evidence does Breitbart present?  Hard verifiable evidence.  Take a look.

You will find more examples below, but here is NewsGuard’s seal of approval (on the Google search page) for Rolling Stone’s 2014 hoax about a gang rape at the University of Virginia (UVA).

Rolling Stone (which NewsGuard gave a passing grade) was eventually forced to retract the story and settle some lawsuits, but the far-left HuffPost’s aggregation of Rolling Stone’s proven lie is still live, and that green checkmark is NewsGuard’s way of telling readers they are reading something credible:

Why is NewsGuard labeling that fake news? Simply because Breitbart News published it. We didn’t even write that story. The AP did. We are simply aggregating the AP…

Look at the roundup below, which took less than 20 minutes to track down. Every single one of these stories is fake news, starting with BuzzFeed’s debunked lie about President Trump telling his then-personal attorney, Michael Cohen, to lie to Congress.

The lie about first lady Melania Trump being an illegal alien — credible!!

The lie about Trump changing the name of Black History Month — credible!!

The lie about Trump threatening to invade Mexico — credible!!

The lie about Congress investigating a Russian fund with ties to Trump — credible!! 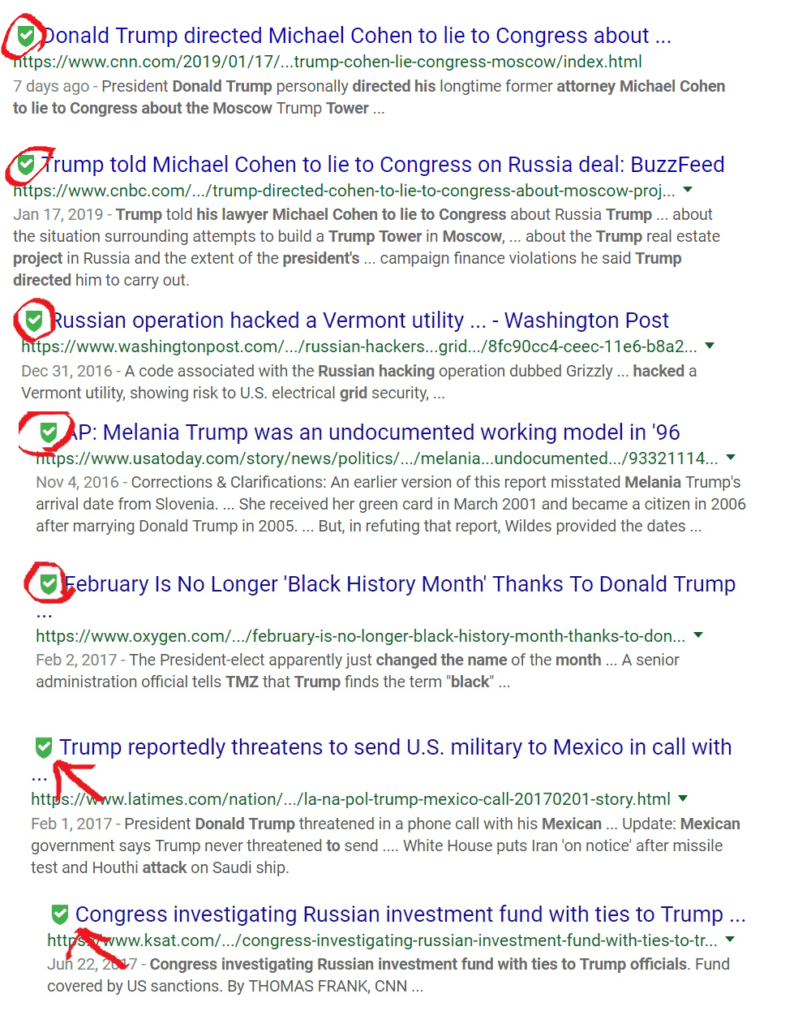 So why? Why are NewsGuard and Microsoft deliberately marking fake news as credible? Why are they looking to fool people into believing proven hoaxes are legitimate stories — even outrageous ones about the first lady coming to the country illegally?

Ahhh, yes, but we are assured that NewsGuard is upright, and look, I don’t doubt there are some people there who are attempting to deal fairly, but the problem is that once they put their label on these sites carrying this demonstrable fake news and fabricated news, what does that do to NewsGuard’s transparency and credibility?  Hmmm?  Perhaps Mr. Brill or Mr. Effron would like to comment.  I’ve already emailed them both seeking a comment of how they have any credibility at all as an organization after this.

Personally, I don’t think a lot of people with pay any attention to what NewsGuard has to say, as more and more people are simply questioning everything and everyone, which is not necessarily a bad thing.

However, how does NewsGuard have credibility by putting a green “healthy” badge on CNN when we have documented evidence of decades of their fake news, fabricated news and bias?  They have a correction policy, but will they use it when it comes to the green badges they have applied to proven sites promoting hoaxes and fake news?  Probably not, just taking a look at CNN’s site demonstrates this.

The organization targeted one of my sites claiming the my site promoted “numerous false articles that promote disproven conspiracy theories,” which is simply not true.  However, they fail to address the biggest, debunked and politically motivated conspiracy theory of Russian collusion over the past two years by those sites they deemed as healthy for your minds to consume.  I’ll wait for a retraction from NewsGuard about those green badges for the majority of mainstream media that promoted it. I won’t hold my breath though.

Don't forget to like SonsOfLibertyMedia.com on Facebook and Twitter.
The opinions expressed in each article are the opinions of the author alone and do not necessarily reflect those of SonsOfLibertyMedia.com.
Previous Post:
Measles Hysteria Peaks as More than 100 Bills in 30 States Seek to Restrict Vaccine Choice
Next Post:
The Push By American Politicians To Implement UN Agenda Of Social Justice