Is This The Reason SouthWest Florida Media Is Silent About The Crimes & Unethical Behavior Of Carmine Marceno?

Money is useful.  Money is used for both good and bad.  However, it is also used to corrupt, especially if you are seeking to keep your crimes and unethical behavior away from public scrutiny.  Sadly, the press sometimes succumbs to this as well, which is why I must ask the question:  Is nearly a quarter of a million dollars in contributions to Waterman Broadcastings ABC and NBC affiliates in Southwest Florida by the Political Action Committee (PAC) that is supporting appointed Lee County Sheriff Carmine Marceno’s election campaign the reason they are failing to report on his unethical behavior and documented crimes?  Is it the reason that they have failed to even respond to a 10-minute, in-depth, documented, investigative report by FOX 4’s Jane Monreal?  Let’s see.

Waterman Broadcasting was obviously and frivolously attacked in a lawsuit by former State Attorney Steven Russell for reporting on his utter failure to prosecute murders.

After two years, the case was finally thrown out, but not after it had a chilling effect on the media in the area.

I previously reported on the lawsuit:

In a lengthy report by NBC2 in 2017, it was reported that in Lee County, killers walked free based on information they obtained from the United States Department of Justice Office of Justice Programs Diagnostic Center for the City of Fort Myers.

While they named Russell in their report, the report from the USDJO did not name Russell, but it’s clear that Russell would have been the one to determine whether to prosecute the cases just as he did not see any warrant to prosecute either of the claims of Deanna Williams.

At that time, NBC2 reported:

Catching killers has been a top priority for city leaders and law enforcement since a spike in homicides in 2011.

The NBC2 Investigators discovered that over the past six years the vast majority of Fort Myers homicide suspects never faced justice.

“By and large we’re very successful,” Russell told the NBC2 Investigators in an exclusive interview. “We have a great relationship with law enforcement. We are not trying to shy away from cases.”

Russell has been a prosecutor in Southwest Florida since the 1970s and took the top job when he was elected in 2002.

In a business where conviction rates often determine success, Russell said he keeps an eye on the stats but doesn’t let it impact his judgment.

“I would think that, generally, we have roughly a 90 percent conviction rate,” Russell said. “We look at it, generally, but I’m not going to get hung up on statistics. Each case is different. What I’m concerned about is are we doing the appropriate thing in each case.”

But some homicides never make it to court at all even though police have a suspect, according to sources in the law enforcement community.

The lawsuit was thrown out in June of this year.

However, NBC and ABC in the Ft. Myers area are both owned by Waterman Broadcasting.  Yet, they will not run clearly documented crimes, fraud and ethical violations of his office by Lee County Sheriff Carmine Marceno, which Sons Of Liberty Media has made public and provided documentation to these outlets, of which NBC2 is one of them.

RTDNA is offering its support to Waterman Broadcasting’s WBBH-TV in Fort Myers, Fla., which is being sued for defamation, along with two of its anchors and one of its reporters, by State Attorney Stephen Russell after an investigative report that aired in November left Russell, according to his lawsuit, with “hurt feelings.”

“As the result of the false and defamatory statements made by [WBBH], Russell suffered and will continue to suffer humiliation, mental anguish, hurt feelings, and injury to his reputation,” according to Russell’s suit, which also names Hodges, and WBBH anchors Peter Bush and Kellie Burns-Garvey, as defendants. Russell is seeking unspecified monetary damages.

Waterman Broadcasting, which would not comment for this story, says in its legal filing that “any and all statements made by the Defendants are protected by the First Amendment of the United States Constitution and also protected by the Florida Constitution.” The station’s filing also asserts that the defendants’ statements in the story “constituted the substantial truth” and that Russell had not claimed the defendants acted “with actual malice,” a key legal standard to prove defamation of a public official.

“RTDNA offers legal assistance to journalists across the country by making available our expert Washington, D.C.-based First Amendment counsel to consult with, and provide advice to, local new organizations’ and journalists’ attorneys,” said Dan Shelley, Incoming Executive Director, who spearheads RTDNA’s Voice of the First Amendment Task Force. The task force was formed to defend against attacks on the First Amendment and news media access, and to help the public better understand why responsible journalism is essential to their daily lives.

“Any time there is an attempt to chill or obstruct the pursuit of responsible journalism, we are willing to stand with and assist the journalists who are targeted,” Shelley said.

Now, the current state attorney, Amira Fox Dijani, a woman whose family is joined at the hip with Islamic terrorists, has failed to prosecute Sheriff Marceno over his felonies spanning more than a decade of impersonating a police officer, which again, Sons Of Liberty Media has documented while both the state attorney’s office and the Florida Department of Law Enforcement fail to investigate to prosecute.  Fox’s office would not return numerous calls by Sons Of Liberty Media for comment.

Furthermore, Fox got into her current office as it appears that Russell provided her a politically motivated arrest of her challenger, Chris Crowley, over something that Crowley made right before it was ever known by the state attorney’s office.

With that in mind, take a look at the contributions by Conservative Champion Leaders, a PAC that is pushing for the election of Carmine Marceno and their nearly quarter of a million dollars given to Waterman Broadcasting.

On July 31, 2019, the PAC supporting criminal Sheriff Carmine Marceno gave $212,521.25 to Waterman Broadcasting for “Media advertising.”  Can we suspect that money was also a form of silencing the media outlet too?  I’ll leave that up to the reader.

Understand that this PAC was put in place by Former Lee County Sheriff Mike Scott, and was turned over to be used for the political purposes of Carmine Marceno and possibly others.

The PAC’s chairman is Eric Robinson. 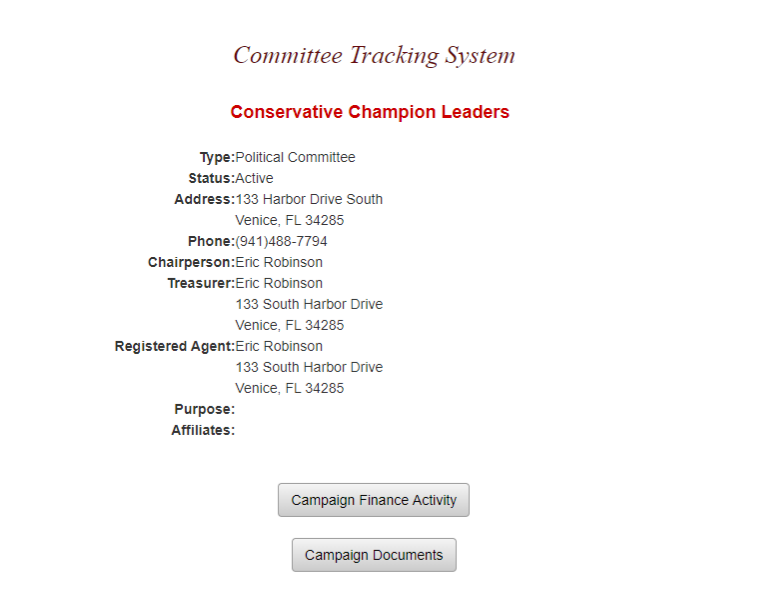 SonsOfLibertyMedia.com reached out to Robinson for comment regarding the payment to Waterman Broadcasting, as well as questioning why the PAC with the title “conservative” in it would support a man that not only can committed multiple documented crimes, but has abused his office by breaking the public trust and even abandoning a woman he impregnated as a result of pursuing her for sex from the Lee County Sheriff’s Office and encouraging her to murder their unborn baby.  As of the publication of this article, Mr. Robinson has not returned our phone call.

Waterman Broadcasting was also called for a response to ask if the substantial amount of money aided in their decision to not report on the documents showing the Sheriff Marceno had committed fraud, perjury and feloniously impersonated a police officer for well over a decade in the state of Florida, something for which he is under investigation by the Florida Commission on Ethics. Darrel Lieze-Adams – Vice President, News was left a voicemail message questioning whether the money for advertising was also a payment for silence in the matter of the report by FOX4 as well as the documentation of Marceno’s crimes and unethical behavior.  As of the writing of this article, no response has been given.

Don't forget to like SonsOfLibertyMedia.com on Facebook, Google+, & Twitter.
The opinions expressed in each article are the opinions of the author alone and do not necessarily reflect those of SonsOfLibertyMedia.com.
Previous Post:
The Price Of Freedom? US Drone Strike Massacred Dozens Of Afghan Farmers As They Slept
Next Post:
Hating Kavanaugh – Killing Journalism

New eBook Of Essays On Outstanding Books About Zionism Offered For Free
October 29th, 2020 The Lid
Send this to a friend