It’s All About The Oil: First Images Of US Troops “Protecting” Syrian Oil Fields

Well, here we are:  America is clearly paying to protect the oil fields in Syria, sort of like we are doing to protect the opium fields in Afghanistan.  If it isn’t one unconstitutional thing, it’s another, and Iraqi Kurdistan24 television has broadcast the very first images of the US Army seizing and occupying a Syrian oil field.

US forces began patrols at oilfields on Mount Qarachokh near Derik in northeastern #Syria on Friday. #TwitterKurds pic.twitter.com/UjdCn6FFVL

Middle East war correspondent Jenan Moussa, who has covered the Iraq war and other US occupations in the region, voiced the growing outrage over the US resource theft underway in Syria:

Since discovery of oil in the MidEast, many in the region said: the U.S. is only here to steal our oil. U.S. denied it, and claimed it’s about democracy, human rights, women etc.

Not sure if Americans realize but these pictures of U.S. troops in northeast Syria are HUGELY damaging to U.S. image.

Since discovery of oil in MidEast, many in region said: U.S. only here to steal our oil.

Not sure if Americans realize but these pictures of U.S. troops in northeast Syria are HUGELY damaging to U.S. image. pic.twitter.com/C3exwUbHtD

The Few. The Proud. The Marines. stealing Syria’s oil.

And further pointed out that, “Trump just showed you the naked truth about US foreign policy in the Middle East.” 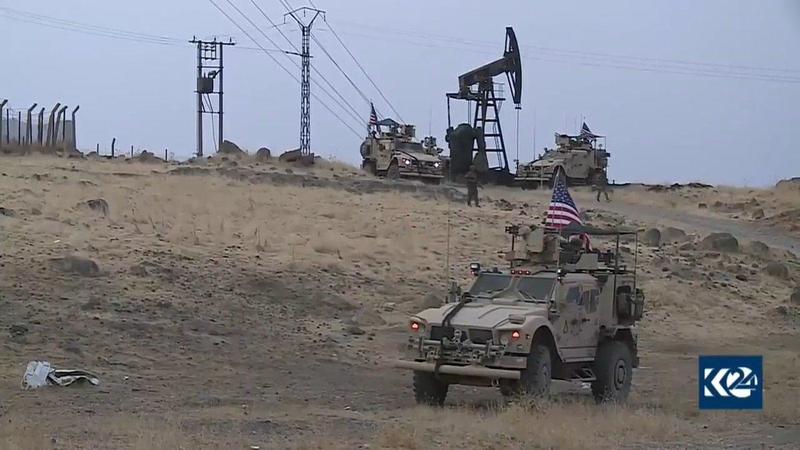 A US coalition statement earlier this week confirmed American forces are being “repositioned” in Syria’s oil rich region just east of the Euphrates to “protect critical infrastructure”.

Mechanized units have been observed going into the area, however, no tanks have as yet been seen.

The coalition statement said that “mechanized forces” providing “infantry, maneuverability, and firepower” are further en route to bolster forces currently redeploying in the region, and in support of Kurdish-led Syrian Democratic Forces.

So, Trump says he wants to pull out of Syria, but this is going on!

The obvious question is, why are Americans paying for our military to no defend the US, but to protect oil fields in Syria?  When it comes to Afghanistan, why are they guarding the poppy fields?

President Trump is reversing his foreign policy decisions so quickly these days that it almost seems like he overturns himself before making the decision in the first place. Last week he was very clear that the US was pulling its troops out of Syria. “Bringing soldiers home,” he said. “Let someone else fight over this long-bloodstained sand.”

But then he overturned himself later in the same speech. He said: “We’ve secured the oil and therefore a small number of US troops will remain in the area where they have the oil. And we’re going to be protecting it and we’ll be deciding what we’re going to do with it in the future.”

Where does President Trump think he gets the legal or moral authority to send US troops to illegally occupy foreign territory and determine what that foreign country can or cannot do with its resources? After eight years of Obama’s disastrous “Assad must go” policy, during which the US provided weapons and training to radicals and terrorists with a half million people killed as a result, President Trump had the opportunity to finally close that dark chapter of US foreign policy so the Syrian people could rebuild their country.

The emphasis of the question posed by Dr. Paul was put there by me.  The US has no moral or constitutional authority to be in Syria nor to occupy oil fields there either.

Yet, there we are, and Paul is right.  This is not about the people’s voices being heard, nor about establishing the rule of law.  It’s about resources, plain and simple.

Don't forget to like SonsOfLibertyMedia.com on Facebook and Twitter.
The opinions expressed in each article are the opinions of the author alone and do not necessarily reflect those of SonsOfLibertyMedia.com.
Previous Post:
Maryland: Man Stabbed To Death Over Popeye’s Chicken Sandwich
Next Post:
Insider: ABC News Network Executives Killed Story Implicating Jeffrey Epstein (Video)