Washington, DC – Today, Bloomberg Business published an article titled, “Abortion Clinics are Closing at a Record Pace.” The article begins by noting that “Abortion access in the U.S. has been vanishing at the fastest annual pace on record.”

Operation Rescue’s own research verifies this claim with numbers that vary slightly from those published in today’s Bloomberg article. That trend is continuing strongly into 2016.

“Our annual surveys of abortion clinics produce the most accurate data out there in regard to abortion clinic closures and current numbers,” said Operation Rescue President Troy Newman. “This is verifiable evidence that we are solidly on the path to an abortion-free America.”

Already in 2016, there have been nine abortion facilities that have closed or announced imminent closures. Even given that two of the closures are expected to be temporary, abortion clinic closures continue on an average pace of one closure per week.

In a report released on December 22, 2015, Operation Rescue documented that 54 abortion facilities closed or halted all abortion services during that calendar year.

Since 1991, surgical abortion clinic numbers have fallen by 81%.

Today, there are 514 surgical abortion facilities and 213 medication-only abortion centers remaining in the U.S.

Reasons for the closures include:

• The retirement of abortionists due to advanced age and declining health.
• New state laws, which have dramatically increased since 2011, that have flushed out many substandard and dangerous operators.
• Declining demand for abortions.
• Continued strong public pro-life support.
• Public exposure of abortion abuses by pro-life groups, including Operation Rescue, which have rightfully eroded public trust in abortion providers.

“New and existing laws are rapidly shutting down abortion facilities that are too dangerous to operate in the first place. This is good news for women whose lives are placed at risk by shoddy conditions and substandard practices that we see all too often at abortion facilities nationwide,” said Newman. “The reality is that the Abortion Cartel is imploding due to its own bad behavior.”

Don't forget to like SonsOfLibertyMedia.com on Facebook, Google+, & Twitter.
The opinions expressed in each article are the opinions of the author alone and do not necessarily reflect those of SonsOfLibertyMedia.com.
Previous Post:
Will Donald Trump Help Attract People of Color to Conservatism?
Next Post:
Former Mexican President Vicente Fox on Trump: “I’m Not Going to Pay for that… Wall!” 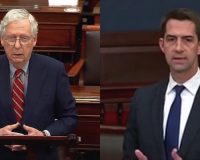 Senators McConnell And Cotton Put The Anti-Israel Left And Their Media Comrades On Full Blast (VIDEO)
May 18th, 2021 Clash Daily

Biden falsely claims that his great-grandfather was a coal miner
May 18th, 2021 Liberty Unyielding

“Saturday Night Live” Ratings Bottom Out To Lowest Number Ever With Only 3.5M Viewers
May 18th, 2021 The Political Cowboy