Nobel Peace Prize winning virologist Luc Montagnier at age 89 after he warned that it was a crime to give children the experimental COVID shots.

The Wall Street Journal reported, “PARIS—French researcher Luc Montagnier, who won a Nobel Prize in 2008 for discovering HIV, the virus that causes AIDS, and who more recently spread false claims about the coronavirus, has died at age 89, according to local government officials in France.  He died Tuesday at the American Hospital of Paris in Neuilly-sur-Seine, a western suburb of the capital, the area’s city hall said. No other details have been released.”

Due to Luc Montagnier’s cause of sudden death, it’s shared that he passed away at the age of 89, at the American Hospital in Neuilly-sur-Seine. Doctor Gérard Guillaume, one of his most faithful collaborators, tells us that he left in peace, surrounded by his children.

Didier Raoult tweeted:”Luc Montagnier has died. We are losing a man whose originality, independence, and discoveries on RNA enabled the creation of the laboratory that isolated and identified the AIDS virus. This earned him fame, the Nobel Prize, and the incredible hostility of his colleagues. The attention paid to his latest assumptions was disproportionate.”

Top Info Guide added as they questioned the cause of death: 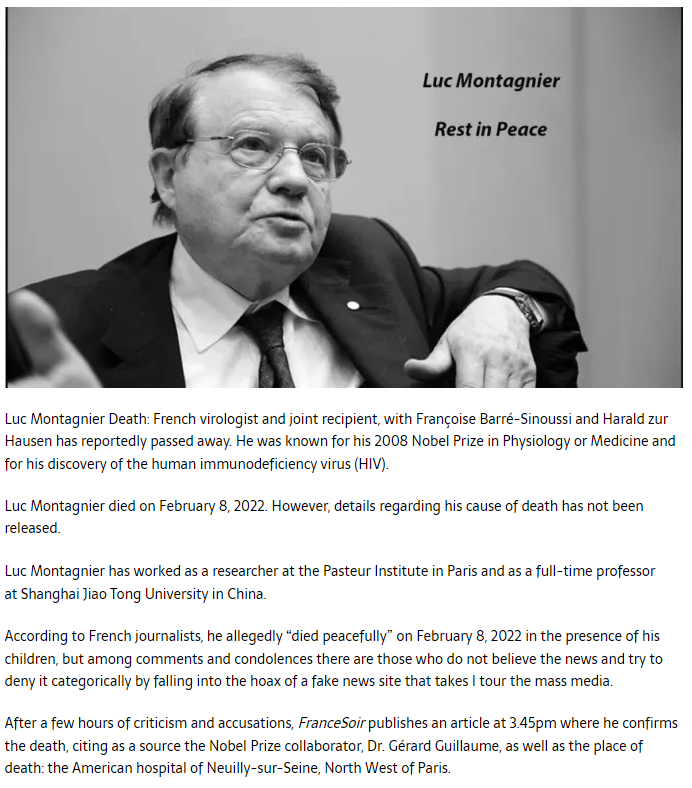 In January, Montagnier addressed the Luxembourg Parliament and told them the shots were poison.

“These vaccines are poisons,” he said.  “They are not real vaccines. The mRNA allows its message to be transcribed throughout the body, uncontrollably. No one can say for each of us where these messages will go. This is therefore a terrible unknown. And in fact we are now learning that this is a work published over a year ago that these mRNAs contain an area that we can call prion, which is an area capable of introducing protein modifications in an unpredictable way. As a doctor I knew 21 people who received 2 doses of Pfizer vaccine, there is another person who received Moderna. The 21 died of Creutzfeldt-Jakob disease caused by prions. The 3 vaccines Pfizer, AstraZeneca, Moderna contain a sequence identified by Information Technology as transformation into a prion. There is therefore a known risk to human health.”

And just days before his death, in his last public speech, he said it was a crime to give these mRNA shots to children.

In a large rally held in Milan, Italy against the mandatory vaccination measures, Luc Montagnier stressed in his speech:

“And this vaccine does not protect at all, it is recognized by the whole world, in fact it favors other infections. The viral protein used for the mRNA in the vaccine is toxic to the cells. It is a poison. There are many dead and many young athletes who have heart problems due to the vaccine! Many young athletes have died as a result of their vaccination. Vaccines should not kill but protect. “It is an absolute crime to give these vaccines to children.”

In November, he warned that prion disease would be the next danger from these experimental shots

Montagnier had also warned that “the curve of vaccination is followed by the curve of deaths.”

Now, he’s dead, and people are wondering what happened to him.

Don't forget to like SonsOfLibertyMedia.com on Facebook and Twitter.
The opinions expressed in each article are the opinions of the author alone and do not necessarily reflect those of SonsOfLibertyMedia.com.
Previous Post:
Learn, Earn, Churn: The Making of Government Minions (Video)
Next Post:
Total Media Blackout Of What Canadians Just Did – It’s Too Glorious Not To Be News! (Video)