Over 50 ‘Classified’ Folders Seized by FBI from Mar-a-Lago Were Empty, FBI DOCTORED MAR-A-LAGO PHOTO, ADDED THEIR OWN DOCS TO CREATE A CRIME SCENE THAT DID NOT EXIST

According to a more detailed property receipt of the seized documents, the FBI discovered 43 empty folders with classified banners in Trump’s office and several others in the former president’s storage. room.
Further The Gateway Pundit is reporting that the FBI created a fake crime scene at Mar-a-Lago by adding their documents to the scene and doctoring the photo of the scene.  This is against the law.
Excerpt:
The DOJ responded in a lawsuit by President Trump asking a judge to review the FBI raid of his iconic property Mar-a-Lago.  In the DOJ’s response, the DOJ included a document they claim was taken at Mar-a-Lago.
The photo was all over the news on Wednesday, August 31, the day after it was provided to the court.  The Independent made fun of the Time Magazine cover on the right side of the photo that the DOJ apparently wanted to include in the photo so that they could show that President Trump is so vain.   There was no need for this Time Magazine piece in the picture.
The Daily Mail said “Trump KEPT framed Time cover of ‘enemies’ knocking at his window among the collection of classified files – including documents marked ‘Top Secret’ and those based on ‘human intelligence’ – sprawled across Mar-a-Lago”.

he cover sheets in the above photo that were red, yellow, and brown were inserted by the FBI.  They are the FBI’s cover sheets.  We know this for various reasons.  The Trump White House did not need these cover sheets in the documents they held because they had their own cover sheets.
If you look closely at the photo above, the document right above the 2A is folded back.  The papers are stapled together as they should be.  If you look at that batch you see there already was a cover sheet on that document.  It says “Please store in…”.  That is the real cover sheet.
The red, yellow, and brown cover sheets were inserted.  If you look closely at the yellow cover sheets, they are paper clipped to the documents.  The documents would have been stapled.  They are paperclipped because they were inserted by the FBI.
Also, the front cover sheet in brown, showing SCI, says the following wording:
Handling, storage, reproduction, and distribution of the attached document must be in accordance with the applicable executive orders statutes and agency implementing regulations. 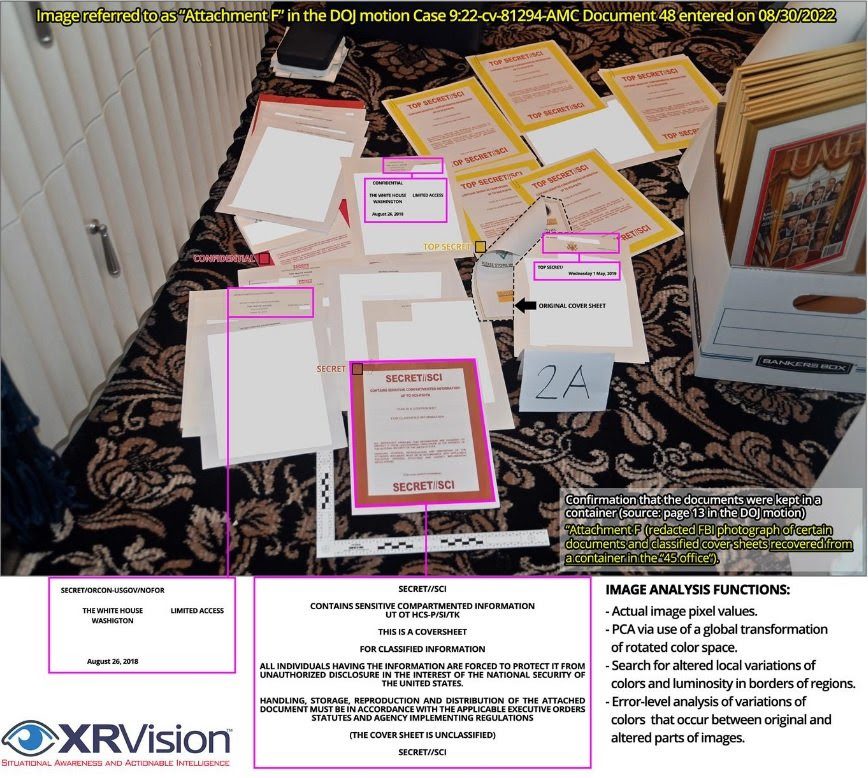 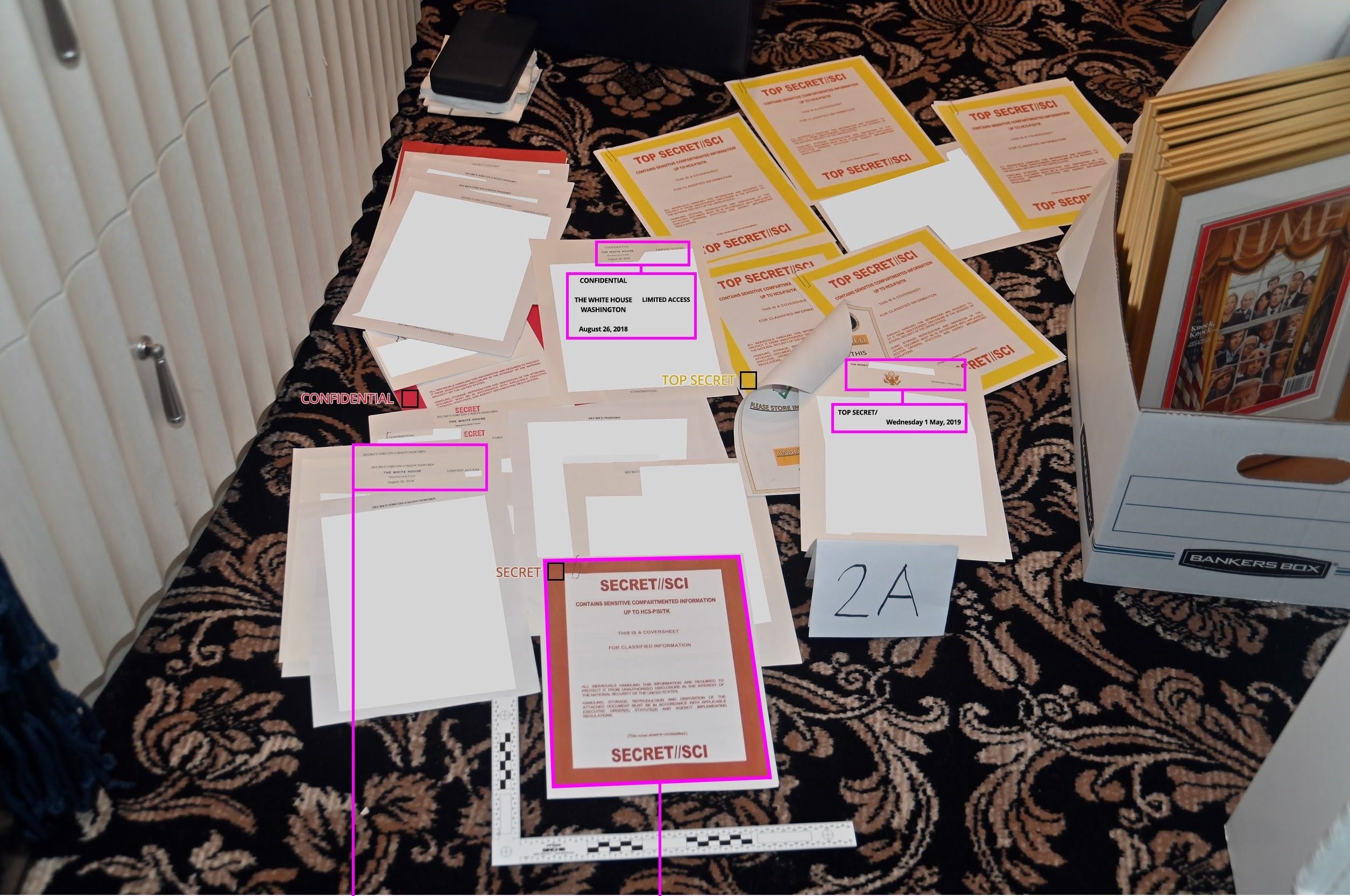 THIS WAS ALL A LIE.  THE FBI CREATED THE CRIME SCENE, INSERTED THEIR OWN DOCUMENTS, AND THEN PHOTOSHOPPED THE DOCUMENT.  WHAT A DISGRACE.

1. WE KNOW THAT THE FBI WANTED TO MAKE THIS LOOK LIKE A CRIME SCENE.

We know this because at the bottom of the photo provided to the court there is the number 2A, indicating that this was a crime scene photo as well as a type of tape measure across the bottom of the photo.  The corrupt FBI threw the photos on the floor themselves.  They staged this.
We know this because the containers were right next door.  The documents would have been placed on a table had the FBI wanted to take a picture of the documents.  Showing them as scattered across the floor is for show to indicate they were found this way, a lie we explain below.  Also, the cabinets are right next to the documents, which is likely where they were stored.  They weren’t stored on the floor. 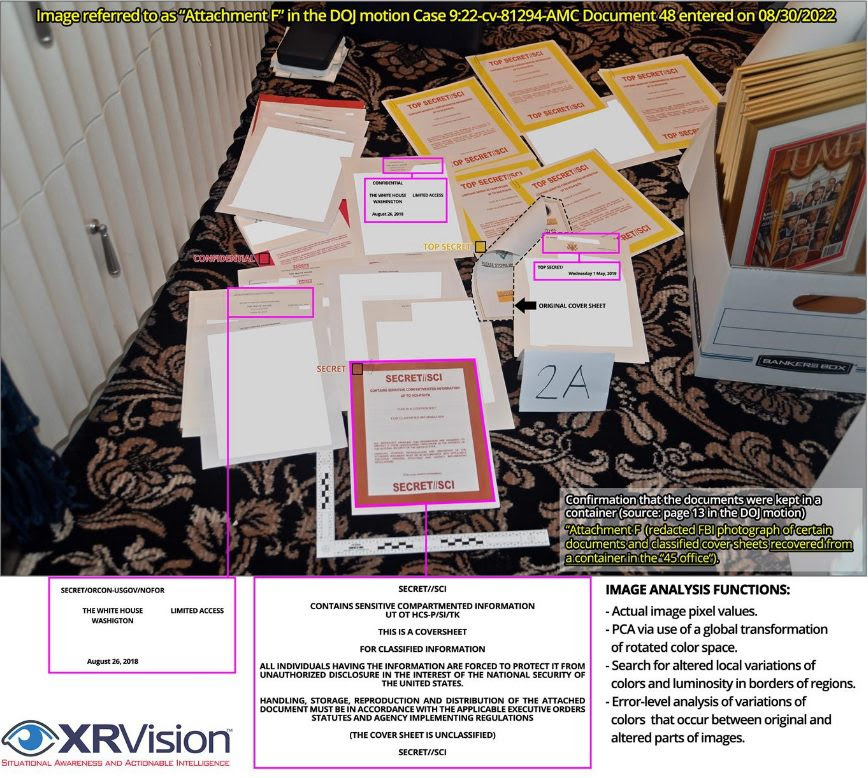 According to a more detailed property receipt of the seized documents, the FBI discovered 43 empty folders with classified banners in Trump’s office and several others in the former president’s storage room.

It is uncertain whether the photo the DOJ recently released that showed classified folders scattered across the floor included any of the empty folders the FBI seized.

Federal Judge Aileen Cannon ordered the DOJ to unseal a more detailed property receipt during a hearing on Thursday. The first property receipt released shortly after the Mar-a-Lago raid only mentioned nondescript items, such as “Miscellaneous Top Secret Documents,” and “Various classified/TS/SCI documents.”

The unsealed property receipt also showed the FBI seized more than 40 empty folders marked “Return to Staff Secretary/Military Aide.” Some government documents were in boxes mixed with personal items like newspapers and magazines.

“The new “detailed” inventory list only further proves that this unprecedented and unnecessary raid of President Trump’s home was not some surgical, confined search and retrieval that the Biden administration claims, it was a SMASH AND GRAB,” Budowich tweeted.

“These document disputes should be resolved under the Presidential Records Act, which requires cooperation and negotiation by NARA, not an armed FBI raid.”

Don't forget to like SonsOfLibertyMedia.com on Facebook and Twitter.
The opinions expressed in each article are the opinions of the author alone and do not necessarily reflect those of SonsOfLibertyMedia.com.
Previous Post:
Biden’s Nuremberg Rally: He Is Literally Hitler Now
Next Post:
Kate Shemirani: Thighs, Tums, Bums – Cellulite & Inflammation (Video)

Arlington Cemetery: They Can Honor Themselves All that They Want, But It Will All Be Sorted Out In The End!
October 4th, 2022 Sons of Liberty Media