The Guardian has promoted a baseless attack on a UK registered nurse and nutritionist who caused a whirlwind of awakening among the population in the United Kingdom in a short twenty-minute video in which she provided facts about the very real threat of the rollout of 5G technology and the timing of the Wuhan virus.

First, from The Guardian:

British broadcasters are being warned that they face sanctions from the media regulator if they give airtime to false health advice about coronavirus, after a Sussex radio station was given a severe warning for broadcasting baseless conspiracy theories that the pandemic is linked to the rollout of 5G phone networks.

Members of the public complained after hearing a broadcast on the community radio station Uckfield FM, in which a woman introduced as a “registered nurse” claimed, without any evidence, that the rollout of 5G phone technology in Wuhan was connected to the outbreak and that the virus had been created in a lab.

It later emerged that she was a practitioner of alternative medicines, while the media regulator said it was “not aware of any reputable scientific evidence to corroborate such a contentious claim which runs contrary to all official advice, both in the UK and internationally, about coronavirus.”

Ofcom confirmed it was actively monitoring television and radio stations that might be broadcasting potentially harmful views about the causes and origins of Covid-19 that have “the potential to undermine people’s trust in the advice of mainstream sources of information” during the crisis.

Baseless suggestions that coronavirus is linked to 5G have spread widely in recent weeks on WhatsApp, Facebook groups, and on the fast-growing community website NextDoor – all of which have the ability to reach vastly more people than a small community radio station in Sussex but are much less regulated.

The woman they are referencing is UK registered nurse Kate Shemirani.

Here’s her video that is in question by the media and Uckfield FM.

Notice that all throughout this Guardian piece the phrase “baseless suggestions” is used, and it uses even more as the hit piece continued.

However, let me address the first thing first.

The Guardian’s baseless use of quotation marks around the term “registered nurse” is meant to imply that the person they are speaking about is not a registered nurse, and it is further implied when Jim Waterson, the media editor for The Guardian, wrote, “later emerged that she was a practitioner of alternative medicines.”

Now, had Waterson done his homework instead of engaging in full, propaganda attack mode, he might have simply taken the time to call up Kate Shemirani to verify her credentials and to take a look at the documentation that she used in her statements.

Furthermore, he could have simply used the NMC.org.uk website to have verified her credentials, but chose not to do so in an attempt to discredit her.  Here’s what readers of The Guardian will find at this link. 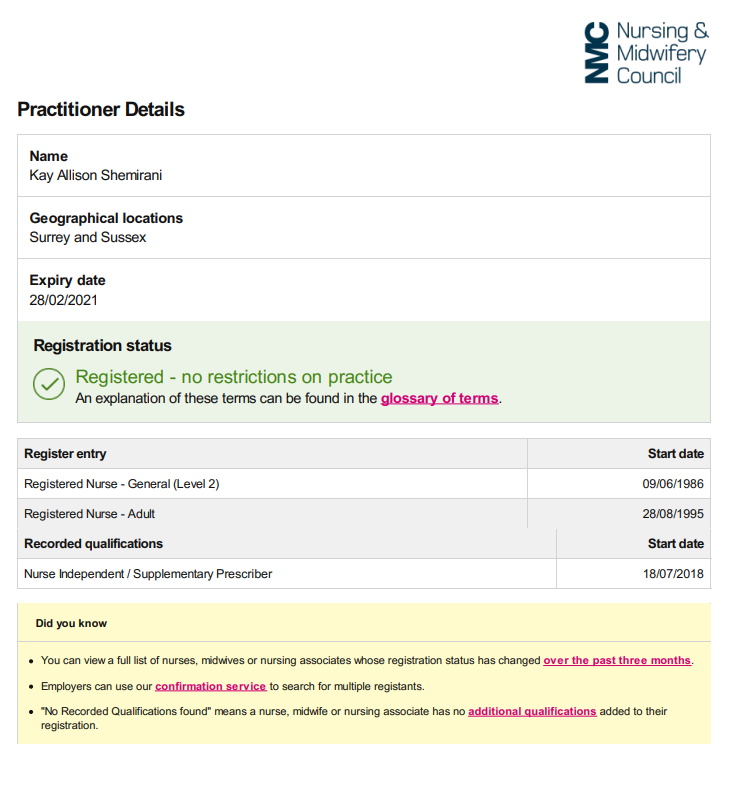 So much for the quotations, eh?  If they can’t even be honest about readily available information about Ms. Shemirani’s credentials, and this applies to Ofcom as well, then how can you trust what they say regarding the facts she put out about 5G?  You can’t.

Ms. Shemirani was notified by Ian Smith from Uckfield FM on April 1, 2020, of a final decision regarding what she said in the video above.

According to the letter, the station was found to be in violation of Ofcom’s Broadcasting Code, specifically Rule 2.1, which reads:

Generally accepted standards must be applied to the contents of television and radio services and BBC ODPS so as to provide adequate protection for members of the public from the inclusion in such services of harmful and/or offensive material.

Now, ask yourself, what was harmful about what she said in that 20-minute video?  Nothing.  It was informative and fact-based.

According to Ofcom’s final decision, they wrote:

Ofcom received two complaints from listeners who were concerned about inaccurate and potentially harmful statements made by a guest on this programme about the Coronavirus crisis. Ofcom is prioritising cases related to the Coronavirus which could cause harm to audiences. This could include:
• health claims related to the virus which may be harmful;
• medical advice which may be harmful; and,
• accuracy or materially misleadingness in programmes in relation to the virus or public policy
regarding it.

However, in their lengthy response, they failed to provide any piece of evidence to refute her claims.  They merely claimed she was not in the “mainstream.”

However, Ms. Shemirani then decided to take to Facebook and clear up the issue with facts, which she had pointed out in the radio segment.

She wrote in response to The Guardian piece:

I wonder who this could be?
It’s me.
I am a Registered General Nurse.
I am a Independant Nurse Prescriber
I have a Diploma in Personal Nutrition.
I practice as a Registered Nurse.
My natural work is in Nutrition.
They really must get their facts straight.
Total rubbish reporting.
A comic!

She then added the following information with links so that people could investigate for themselves, something that I would suggest Ofcom and The Guardian actually do rather than run in hysteria over two complaints who couldn’t disprove what she said.

The press have just tried to discredit me and also lie about what I said. They can’t name me. Because I had facts. Then they would be liable and I will sue! Well the video has had around 1M views. Watch the link above. The lying liars of lies.

First of all I would like to add..
I used facts.

1)mandatory vaccines in China. Parents are obligated by law.
https://www.loc.gov/…/for…/article/china-vaccine-law-passed/

4) vaccines are dangerous and kill :- https://www.wellnessdoc.com/1200studies/
drs and nurses and pharmacists ?? vaccines.. who gives them?

5)CDC in USA caught lying about vaccine under FIA abs it causing autism last year in a US court of law.
https://thewashingtonstandard.com/vaccine-truths-the-cdc-w…/

7) and let’s not forget…. just making a point here! ..🙄
I trust no one. I was told I needed chemo. I needed tamoxifen for 7 years. I menopause’s naturally 2.5 years after diagnosis. I had many vaccines as a child and a nurse and a flight attendant. Only when I got cancer and started researching did I discover the vaccines were probably a cause! They contain poison and cancer causing immortal cell lines. Fact. Research everything and make an informed consent.
https://m.ranker.com/…/serial-slayers-who-were…/ranker-crime

I wonder who this could be?It’s me. I am a Registered General Nurse. I am a Independant Nurse Prescriber I have a…

Understand that Ms. Shemirani has been providing her services free of charge and has had no verbal nor written contract with the station.  Furthermore, she did remove references from her social media regarding Uckfield FM.  Therefore, they really don’t have a leg to stand on in taking legal action against her.

In fact, they acknowledged that she was their “health and wellness expert” until they didn’t like what she said about 5G, which she documented.

It’s disgraceful and disgusting what Ofcom, Uckfield FM and The Guardian have done in their response to Ms. Shemirani, all for the sake of trying to make themselves look good without providing an iota of evidence to refute the things she said.

Be sure to check out my two interviews with Ms. Shemirani below.

Don't forget to like SonsOfLibertyMedia.com on Facebook and Twitter.
The opinions expressed in each article are the opinions of the author alone and do not necessarily reflect those of SonsOfLibertyMedia.com.
Previous Post:
The Attack on Civil Liberties in the Age of COVID-19: Threats To Bring On The American Police State Out In The Open On A Scale We’ve Never Seen Before
Next Post:
Government Wants The Power To Save You Even If It Destroys You

International Holocaust Remembrance Day: The Rabbi Who Was Silent About Holocaust
January 27th, 2022 The Lid