With little fanfare in the U.S. media, President Obama and his team of war hawks have cut off diplomatic relations with Russia, and are instead maneuvering aggressively towards a war footing.

The clash of objectives in Syria – namely, the fundamental differences in their position on Assad remaining in power as well as the underlying causes that led to the tension, fueled the rise of ISIS and pitted world powers against each other – are increasingly drawing the world into a perilous position.

President Putin, as well as his ministers, have made clear that if the U.S. strikes Syrian forces or attempts to directly take out Assad, it will also be prodding for world war – and that could mean the gravest threat to Western civilization since the Cold War. Because apparently American leaders just can’t resist intervening in Middle Eastern affairs.

Russia is on high alert, and its newspapers recently echoed the warnings of its leadership:

“Just imagine that the US does what it has wanted to do for a long time and strike against Assad, not by mistake but on purpose and openly.

“Should Russia defend its ally or consider striking against the Americans but this would definitely lead to a Third World War.

• While Americans are scared up over creepy clowns, Russians are conducting drills for tens of millions of people taking shelter from nuclear war.

• While Hillary Clinton attempts to convince Americans to go back to sleep and ignore her emails, her many corrupt dealings and breaches of security, foreign adversaries – including Russia and China – are engaged in cyber warfare, while a few dissidents are also attempting to expose Hillary and other leaders.

• While the U.S. diplomats are covertly arming ISIS, al Nusra and what remains of the “moderate Free Syrian Army,” and scheming to unseat Assad through outside groups and public pressure in the media, Russia is flexing its next generation of electronic warfare devices, jamming equipment, cloaking devices and demonstrating its sophisticated ability to control and maintain airspace.

The future of war is increasingly intertwined with major threats, focal flashpoints and communications-based electronic warfare.

To give just one prominent example, the threat from an EMP (electromagnetic pulse) could shut down the grid, kill millions of people in the aftermath and bring an enemy population to its knees overnight.

With these new threats in mind, the U.S. military and armed services are preparing quietly but steadily for a war that could become inevitable, though no one wants to admit it.

Solicitation notices on FedBizOpps.gov reveals that there is considerable effort going into upgrading, fortifying and securing communications technology– particularly for SSBNs, one of the most important pieces on the chess board.

Nuclear submarines must be in constant communication around the world, in any waters, and be able to avoid detection. However, compromised communications could cutoff communications or render subs ineffective when they are needed most.

Very Low Frequency and ELF wavelengths are used to cover the long distances, but are also subject to interception and manipulation. These electromagnetic signals require powerful equipment and can have negative biological effects on human operators, as well as populations of human and animal life. VLF and ELF electromagnetic weapons are very potent when in capable hands, and quite dangerous in the face of an oblivious and naive population. 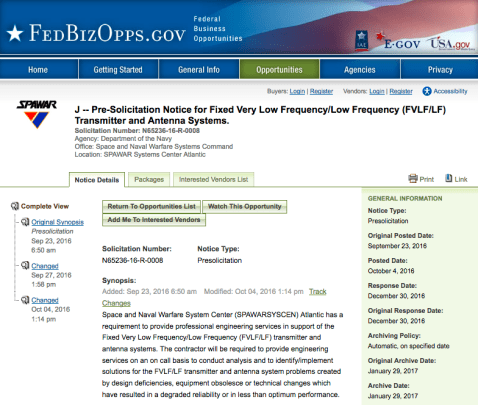 Time to upgrade the electromagnetic communications devices that could make or break the outcome of a nuclear war.

Space and Naval Warfare System Center (SPAWARSYSCEN) Atlantic has a requirement to provide professional engineering services in support of the Fixed Very Low Frequency/Low Frequency (FVLF/LF) transmitter and antenna systems. The contractor will be required to provide engineering services on an on call basis to conduct analysis and to identify/implementsolutions for the FVLF/LF transmitter and antenna system problems created by design deficiencies, equipment obsolesce or technical changes which have resulted in a degraded reliability or in less than optimum performance.

The FVLF/LF transmitting stations provide the primary broadcast communications link for the command and control of Strategic Submarine Ballistic Nuclear (SSBN) and Strategic Submarine Nuclear (SSN) submarines making it part of the Nuclear Command and Control Communications (NC3) architecture. Those stations were designed and constructed at various times over the past six decades. Consequently, each is unique and all are subject to problems peculiar to particular stations requiring the employment of consultants well versed in highly specialized areas of FVLF/LF transmitter, antenna, and antenna network theoretical and applications engineering. Timely solution to problems as they develop is necessary to ensure reliable communications to fleet commanders in command and control of submarines.

Additionally, the Navy has current bids for maintenance and repair of Trident II missile guidance and navigation systems, on board safety systems and installations and upgraded security technologies for SSBN submarines – which play a significant role in both deterrence and provocation.

These are crucial factors, particularly in the context of sophisticated, technologically-driven warfare. 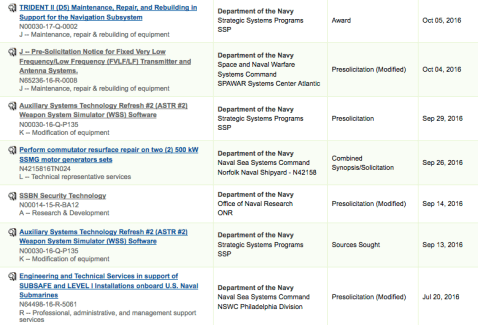 Again, the proposal hints strongly at the known and unknown vulnerabilities of submarines in being detected and communicating covertly. SSBN security technology is critical:

The Office of Naval Research (ONR) and the Undersea Influence, Counter-USW Branch (N974B) of the Chief of Naval Operations’ (CNO) Undersea Warfare Division (N97) are interested in receiving proposals focused on the identification of science and physics based signal detection technologies that, individually or as a system, can impact the security of the SSBN and submarines in general. Passive and active detection technologies with near term (0-5 years), mid-term (5-10 years) and far term (10-20 years) implications will be considered.

[T]he SSBN Security Technology Program (SSTP) may entertain proposals focused on improving the understanding of the generation, radiation, propagation, scatter, and detection of a variety of signal types (acoustic, chemical, optical, electromagnetic, hydrodynamic and radiological) associated with a submarine’s operation.

It looks like the old fleet is getting dusted off, fixed up or making way for new and better models, ready for war – if the need arises.

Let’s just hope it doesn’t come to that.

Don't forget to like SonsOfLibertyMedia.com on Facebook and Twitter.
The opinions expressed in each article are the opinions of the author alone and do not necessarily reflect those of SonsOfLibertyMedia.com.
Previous Post:
The Storm Of The Decade: 23 Key Facts About Hurricane Matthew As It Prepares To Slam Into The East Coast
Next Post:
FBI Releases Video with New Details about Minnesota Mall Jihadi & Refugee Dahir Adan