Remember when all the talking heads in the Mockingbird media and corrupt politicians were calling for Wikileaks founder Julian Assange to get ” a bullet in the head”?  No? Let me remind you.

With a recent ruling by a court in the United Kingdom, they have determined that Assange can now be extradited to the US to face trumped up charges against him.

More than 2.5 years have passed since Wikileaks’ founder Julian Assange was dragged from the Ecuadorian embassy in London after 7 years in hiding from British authorities, during which time Assange has struggled through a lengthy court battle, all while remaining imprisoned. And yet it seems Assange’s real nightmare is only just beginning as Britain’s high court ruled Friday that he could be extradited to the US to face charges that could see him imprisoned for the rest of his life.

Judges at the Royal Courts of Justice in London overruled a lower court judge who had decided nearly a year ago that Assange shouldn’t be extradited to the US due to the threat of him facing unjust physical harm (not to mention the very real possibility that Assange might kill himself, as the judge acknowledged). They ruled that Assange can face extradition to the US, practically guaranteeing that he will stand trial in an American courtroom.

Assange can appeal the ruling, but it’s clear at this point that the chips are stacked against him. The US government has been quietly pursuing charges against the Wikileaks founder under the Espionage Act for years. According to what’s been publicly revealed, Assange is facing an 18 count indictment in the US with most of the charges focused on violating the Espionage Act. Should he be found guilty, Assange could be imprisoned for up to 175 years.

In response to the ruling, Wikileaks slammed the US for trying to avoid accountability by covering up the “collateral murder” incident where two Reuters journalists were killed in Iraq, along with innocent civilians, by the US military. The infamous footage from that incident, which was first published by Assange after being leaked by Chelsea Manning (back when she was an army intelligence analyst named Bradley Manning).

Julian Assange’s extradition is being sought for such revelations as the #CollateralMurder gunning down of civilians, including children and 2 @Reuters journalists by the US in #Iraq for which they tried to evade accountability #AssangeCase #FreeAssangeNOW pic.twitter.com/DX0tgHjeiA

As Axios reminds us, Assange’s case has serious implications for journalists in the US, and around the world.

The case has raised significant questions about First Amendment protections for publishers of classified information, as Assange argues he was acting as a journalist when he published leaked US government documents on Iraq and Afghanistan.

In a statement, WikiLeaks Editor-in-Chief Kristinn Hrafnsson said “Julian’s life is once more under grave threat, and so is the right of journalists to publish material that governments and corporations find inconvenient.”

WikiLeaks Editor-in-Chief Kristinn Hrafnsson: “Julian’s life is once more under grave threat, and so is the right of journalists to publish material that governments and corporations find inconvenient #AssangeCase #FreeAssangeNOW https://t.co/xD0NDaxhHJ pic.twitter.com/rtQkLglhv9

Assange’s fiancee, Stella Morris, called the ruling “dangerous and misguided” and said his legal team intends to appeal – something his lawyers also claimed in a letter that has been shared on social media. 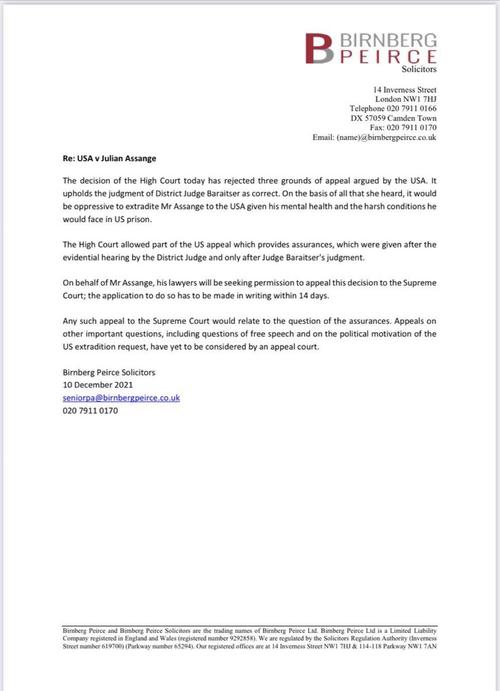 In its petition to overturn the lower court’s decision to block Assange’s extradition, the US managed to assuage the judges’ concerns about Assange’s mental and physical health, and that Assange’s risk of suicide would be greatly reduced. The US authorities have given assurances that Assange will not be placed in the most highly restrictive conditions unless he does something in the future to warrant it.

Giving the judgment, Lord Chief Justice Lord Burnett said: “That risk is in our judgment excluded by the assurances which are offered.”

“It follows that we are satisfied that, if the assurances had been before the judge, she would have answered the relevant question differently.”

Judge Timothy Holroyde said he was satisfied with the assurances given by the US about Assange’s treatment in custody. Holroyde said the case must now be remitted to Westminster Magistrates’ Court with the direction that judges send it to the British government to decide whether or not Assange should be extradited.

To be sure, all is not yet lost for Assange. Reuters reported that Assange’s inevitable appeal would likely send the matter of his extradition to the UK’s Supreme Court.

As we mentioned above, lawyers for the US offered the British high court four assurances, including that Assange would not be subject to solitary confinement before or after his trial, and that he would not be detained at the ADX Florence Supermax jail in Colorado – a federal prison that’s home to some of America’s most infamous criminals. In light of reports about Assange’s deteriorating health, the US also promised that he would receive all necessary clinical and psychiatric help.

They argued Assange’s mental illness “does not even come close” to being severe enough to prevent him from being extradited, but also reassured the British that Assange would be allowed to transfer to Australia to serve any prison sentence he may be given closer to home.

The US has insisted that by publishing thousands of pages of classified documents, Assange put American lives in danger. It’s not clear when Assange will be extradited, but now that the High Court has ruled, it’s likely he will be moved across the Atlantic to stand trial in the US very soon. That trial will likely be closely covered by the international press, just like every other chapter of Assange’s nearly decade-long legal battle.

Russian Foreign Ministry spokesperson Maria Zakharova, writing on her Telegram channel, blasted the UK high court’s judgment while pointing out the irony that it happened on International Human Rights Day.

“This shameful verdict in this political case against a journalist and public figure is another manifestation of the cannibalistic worldview of the Anglo-Saxon tandem,” she said.

Assange’s loyal band of supporters gathered outside of the court after the ruling, chanting “free Julian Assange” and “no extradition.” They tied hundreds of yellow ribbons to the court’s gates and held up placards saying “journalism is not a crime”.

Julian Assange is enemy number one of every corrupt government in the world.  If he is extradited to the US, there is no doubt they will murder him.  He has been exposing governments and corruption long before controlled opposition Trump came along and he’s done far more than Trump to aid the people with the information they need to take their governments back and clean house, but you see how grateful people are to him that they will not even raise their voice in opposition to this injustice he is facing.  Shame on us!

Don't forget to like SonsOfLibertyMedia.com on Facebook and Twitter.
The opinions expressed in each article are the opinions of the author alone and do not necessarily reflect those of SonsOfLibertyMedia.com.
Previous Post:
‘Media Bears a Responsibility’ – Protesters Demand Justice for Survivors amid Maxwell Trial (Video)
Next Post:
Kate Shemirani – On Trial Or Being Railroaded? (Video)