Despite internal reports at the Hunter Holmes McGuire VA medical center revealing that a doctor was banned from performing various surgeries on dogs because of his abysmal track record of fatalities, the facility still has him listed as an active physician.

The reports, obtained by the animal rights group White Coat Waste Project and provided to The Daily Caller News Foundation, indicate that physician Alex Tan, involved in animal research, botched dog surgeries so badly that he was taken off a project and banned from various types of dog surgeries in the future. Tan’s LinkedIn page shows an active affiliation with the McGuire medical center, as does the VA medical directory.

TheDCNF could not independently confirm if he is in a position to perform surgeries on veterans, but Tan’s short bio noted his “interests include implanting defibrillators and pacemakers, performing ablation procedures for atrial and ventricular arrhythmias, and device and lead extractions.” Tan did not provide comment to TheDCNF by press time, and the VA refused to deny if he is performing surgeries on veterans.

Tan was involved in three surgical incidents dating from December 2015 to October 2016.

In the December 1, 2015, incident, Tan, the Principal Investigator on project 02002, gave a sedative overdose to a dog, and by the time Tan left for the day, at around 12 a.m., the dog was obviously not recovering from surgery and remained unresponsive. The dog was not provided with any fluids until 7:30 a.m. the next day, even though those fluids were medically indicated. The dog was also not placed on a warming pad, per proper procedures.

The next morning, Tan’s technician found the dog totally unresponsive and suffering from low blood pressure and short, belabored breaths, and accidentally gave that dog the wrong drug for pain relief. Once the supervisor arrived and was notified of the situation, the dog was given a separate drug to reverse the first, placed on a proper warming pad and closely monitored. The dog, amazingly, managed to recover by the next day.

Upon review, the Institutional Animal Care and Use Committee, which research facilities are required to have by law, stated that Tan had failed to provide proper care to the dog and abandoned the dog in a “state that could have led to death.” The committee also mandated that Tan receive serious training and close supervision.

“Understand that any future serious violations may result in full suspension or termination of your animal protocol at the VA,” the committee warned.

The second incident on March 2, 2016, doesn’t directly name Tan, but the report references the surgeon involved as the Principal Investigator on project 02002, which of course is Tan. In this case, Tan severed a dog’s cardiac nerves, causing the dog to quickly deteriorate through nausea, weight loss and anorexia, thus leading to a fatal heart attack in the middle of an experiment, despite the fact that the same simulation had been performed on 28 previous dogs with no ill consequences.

Before it became clear that Tan’s surgery lead to the death of the first dog, he completed the same surgery on a second dog. This second dog suffered much the same and subsequently died. A review determined the botched surgeries were behind the death of the dogs.

Finally, on October 11, 2016, Tan sliced into a dog’s chest to get at the heart and instead accidentally sliced the lung, leading to hypoxia and death. At this point, Tan’s authorization to perform surgeries on dogs was revoked. He was taken off the project, though the project itself continued, despite protests from a member of the animal research oversight committee at McGuire, who referred to his behavior as “reckless” and evident of a “lack of foresight.”

“The lack of foresight and preparation by the investigator prior to this surgery leads me to believe the investigator has a general sense of unintended reckless behavior,” the committee member wrote in full. “The investigator’s actions threaten the integrity of this institution and I vote to close this study.”

Tan again wasn’t directly named in this third report, but the surgeon is identified as the “principal investigator and surgeon from 02002 and 02235.”

VA public affairs refused to directly answer any questions relating to whether the botched surgeries were reported to the secretary of the VA as required under section 2.37(a) of the Animal Welfare Act, nor did it answer whether Tan received any major discipline.

The VA also declined to say whether Tan was actively treating veterans in any capacity.

Instead, the VA offered a strictly general statement to TheDCNF, stating that “animal research is strictly controlled and monitored with accountability mechanisms in place that comply with the same regulations and standards that university programs, state, private, military or civilian organizations employ. As part of that commitment, VA takes seriously any reports of not adhering to standards and will immediately review and correct processes if and when those issues arise.”

The VA noted that dogs are used only in rare cases, and in 99 percent cases, researchers rely instead on rats and mice.

The White Coast Waste Project has asked for the inspector general to conduct a full review on animal experimentation at the VA, and as reported by Stars and Stripes, Democratic Rep. Dina Titus and Republican Rep. Ed Royce have also urged the VA to conduct an investigation.

Don't forget to like SonsOfLibertyMedia.com on Facebook, Google+, & Twitter.
The opinions expressed in each article are the opinions of the author alone and do not necessarily reflect those of SonsOfLibertyMedia.com.
Previous Post:
12 Signs That America Has Become A Politically-Correct Madhouse
Next Post:
NC Legislature Sells You & Your Children Out to Transgenders for 30 Pieces of Silver from NCAA 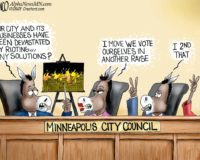 The Lid On The Schaftlein Report (VIDEO)- Trump’s Speech, Pelosi Payoff, Biden’s Blunders And MUCH More
March 2nd, 2021 The Lid