Vaccine Horror: Myopericarditis Rates off the Charts –Cardiovascular Manifestations Found in 29.24% of Patients

“Cardiovascular manifestations were found in 29.24% of patients.”

They are killing our young people.

“If you take that vaccine, you’re [400%] likely to die from a fatal cardiac arrest over the next six months than if you don’t.”

“Cardiovascular manifestations were found in 29.24% of patients.”

They are killing our young people.

Where are the investigations, indictments, trials? how can such an enormous crime against the whole population go unpunished? And censored by a dangerous, complicit media?

Analysis found that there is an 84% increase in the relative incidence of cardiac-related death among males 18-39 years old within 28 days following mRNA vaccination. With a high level of global immunity to COVID-19, the benefit of vaccination is likely outweighed by this abnormally high risk of cardiac-related death among men in this age group. Non-mRNA vaccines were not found to have these increased risks.

Equally as worrying, “Cardiovascular manifestations were found in 29.24% of patients.”

When Pfizer and Moderna went for full FDA approval, they received from the FDA a Biological Licensing Agreement (BLA) letter, essentially stating, “You must study myocarditis with your vaccines.”

What that entails, explained Dr. Peter McCullough, is prospective cohort studies, meaning you measure everything (troponin levels, EKG, echocardiogram, ultrasound, etc.) at baseline, give the vaccine, and compare the results from before and afterwards.

But surprise, surprise, they never did those studies.

However, Mansanguan & Colleagues from Thailand did — and the data is alarming.

Their study had a total of 301 children aged 13 to 18. They screened each person’s cardiovascular baseline via troponin levels, EKGs, echocardiograms, ultrasounds of the heart, etc. — gave two doses of the Pfizer vaccine, and repeated everything afterwards.

“And here’s the bombshell.”

They came up with a suspected myopericarditis rate of 2.33%.

• Equally as worrying, “Cardiovascular manifestations were found in 29.24% of patients, ranging from tachycardia or palpitation to myopericarditis.”

Previously, the FDA had estimated six new cases per million. There were data from Tracy Beth Høeg, UC Davis said [253 cases] per million, and then Kaiser Permanente had an estimate of 537 per million. 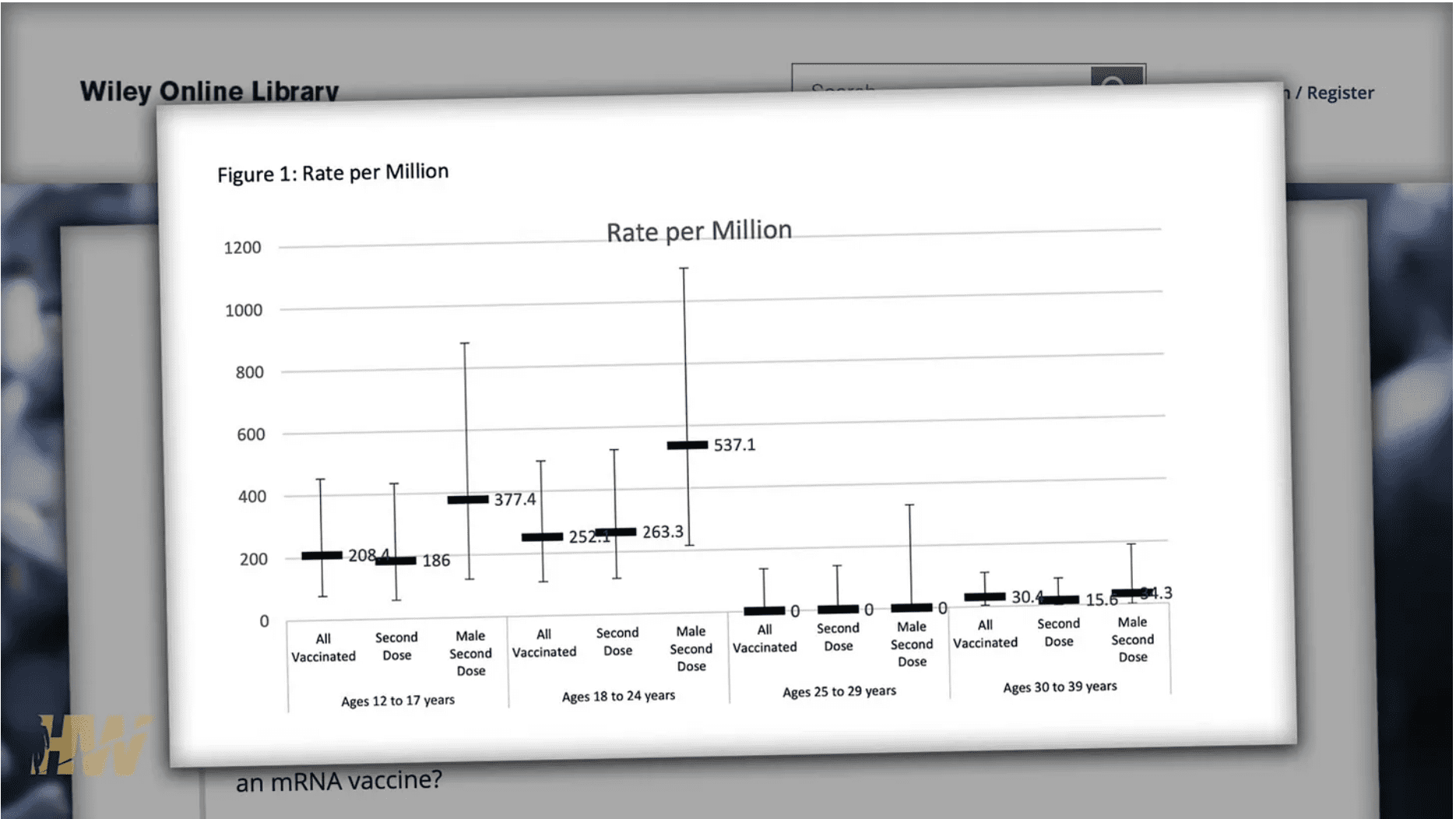 This blows that out of the water! This is [23,300] cases per million, according to Mansanguan. And of those seven kids that had myocarditis that was serious, two kids [were] hospitalized.

This is third-grade-level math that our regulatory agencies can’t seem to calculate. Which number poses the greater threat to your child: 2.33% (23,300 per million) or 0.0027% (27 per million)? And that doesn’t even include the vast array of other potentially serious side effects. The risk/benefit analysis between these two prospects is completely upside down, with an 863-FOLD GREATER RISK for a teenager to develop myopericarditis! 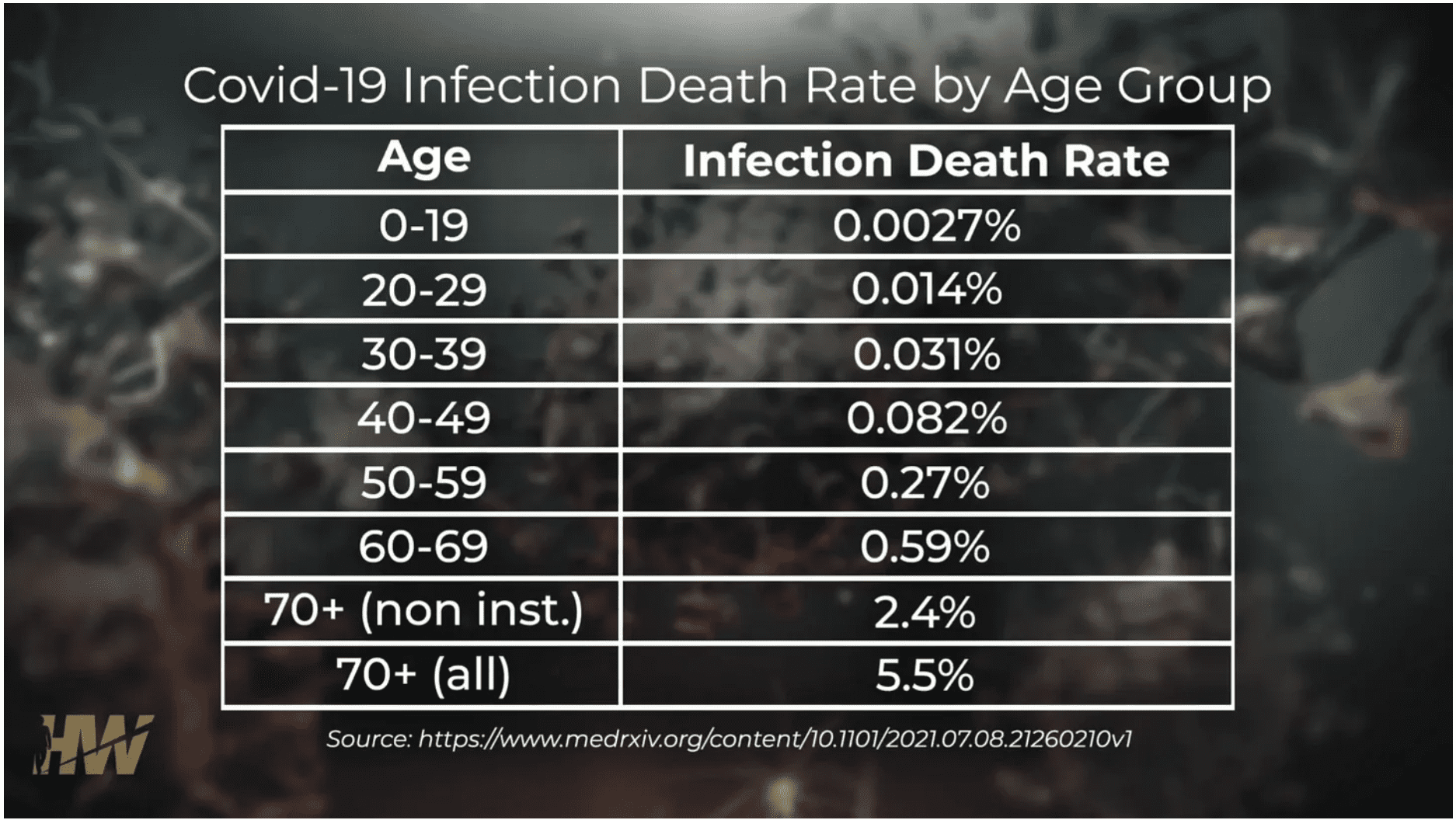 And Mansanguan’s results have been corroborated by renowned cardiologist Christian Mueller.

What he did was he looked at the troponin levels of 777 healthcare workers before and after the third shot — and what he found was a rise of troponin to the point of indicating a cardiac injury in 2.8% of the individuals.

Interestingly, after these studies came out, Pfizer and Moderna finally announced they are launching their own cardiac studies on myocarditis.

“That is so egregious,” remarked Del Bigtree.

Don't forget to like SonsOfLibertyMedia.com on Facebook and Twitter.
The opinions expressed in each article are the opinions of the author alone and do not necessarily reflect those of SonsOfLibertyMedia.com.
Previous Post:
Call Of Duty Is A Government Psyop: These Documents Prove It
Next Post:
Kate Shemirani: The Culling Continues PLUS How Do You Take Your Coffee? (Video)