The biggest hoax ever pulled on the people of the united States while advancing the very thing that is probably making them sick has resulted in the biggest heist in history and the biggest power grab of government both at the state, local and federal levels we’ve ever seen.  Yet, there are still 9 states in the union that are resisting the urge to move towards tyranny and impose stay-at-home orders due to what is clearly a lie concerning coronavirus.

Tyler Durden at Zero Hedge has the story:

Dr. Anthony Fauci has been talking up a federal-imposed nationwide ‘stay at home’ order, though many might challenge the very legality or possibility that Washington would even have the power to impose it on states. Thus far Trump has resisted such a move, preferring to leave these questions to the governors.

Meanwhile, much of the mainstream media has directed its ire at the last “hold-out” states which have “dragged their feet” on the issue. Many governors have expressed that they don’t see the need to take such a drastic step that could decimate their local economies, leaving social distancing to the ‘good judgments’ of counties, towns, and individuals.

For example CNN has headlined its story: “Why these 8 Republican governors are holding out on statewide stay-at-home orders?”

The nine states that have resisted shutting everything down are Arkansas, Iowa, Nebraska, North Dakota, Oklahoma, South Carolina, South Dakota, Utah and Wyoming.

Gov. Kim Reynolds of Iowa expressed this during a recent press conference, saying:

“What else are we doing by doing a shelter-in-place or stay-at-home order except for potentially disrupting the supply chain, putting additional pressure on the essential workforce, and making sure that we are considering how we bring that back up?”

In some instances like Iowa, schools and ‘non-essential’ businesses have been closed, while a state-wide ‘one size fits all’ approach has been resisted. Oklahoma has also come practically close to a stay-at-home order, without actually issuing the formal directive. 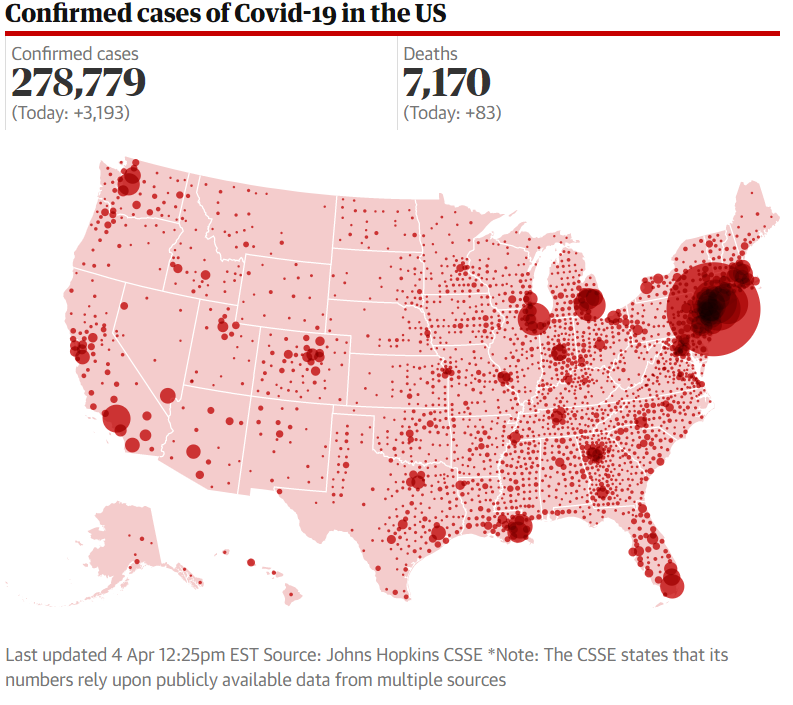 Nebraska Gov. Pete Ricketts also affirmed it should be a local and regional matter. He was cited in ABC News as saying, “We’re a different state than states like New York that are doing that. We are much earlier in the epidemic curve than New York.”

By the New York Times‘ numbers, some 311 million people have been urged to stay home in at least 41 states:

In a matter of days, millions of Americans have been asked to do what might have been unthinkable only a month ago: Don’t go to work, don’t go to school, don’t leave the house at all, unless you have to.

The directives to keep people at home, which began in California in mid-March, have quickly swept the nation.

On Friday, Alabama and Missouri became the latest states to issue such orders. A significant majority of states, the Navajo Nation and many cities and counties have now instructed residents to stay at home in a desperate race to stunt the spread of the coronavirus.

This means at least 311 million people in at least 41 states, three counties, eight cities, the District of Columbia and Puerto Rico are being urged to stay home.

Governors have said they’ve “agonized” over the decision, given that the economic effects among the earliest states to give the directive were felt immediately.

Ohio for example just days after its governor essentially shut down the state, saw an immediate 600% rise in unemployment filings, with that figure climbing steadily since.

United Kingdom nurse Kate Shemirani has exposed both the fact that you cannot transmit a virus to another person and what most likely is causing people to have viruses, which are a response to toxins in the body, not the cause of them.

She also has been smeared in the ignorant newspaper in the UK, The Telegraph, but we set the record straight.

It’s time that government representatives and medical “experts” were held accountable for their lies and deceptions about viruses and how they operate, and in the case of representatives at all levels who have continually pushed these lies to be removed from office when they have engaged in tyranny as a result of the lies.

Don't forget to like SonsOfLibertyMedia.com on Facebook and Twitter.
The opinions expressed in each article are the opinions of the author alone and do not necessarily reflect those of SonsOfLibertyMedia.com.
Previous Post:
Islamic Studies Academic Claims Jihadi Was Inspired By Anti-Jihad Author Because Of Qur’an Verses List On His Website
Next Post:
The Lord Is Willing To Give The Church What It Is Willing To Fight For! Those Who Are Of “Another Spirit” Understand