Sometimes, it’s almost a shame to write a report about it, but it’s to prove a point, and that point is that when you are going to take a stand, no matter what it is, you will find ignorant, useful idiots to peddle their ignorance and lies.  In this case, it comes from Cory Allen Heidelberger at the Dakota Free Press (DFP) in a piece in which he claims that constitutional sheriff Richard Mack puts for “unconstitutional and dangerous notions” and that preacher Bradlee Dean promotes “insurrectionism and lies.”

First, though Dakota Free Press doesn’t reach any high number of people, we want to thank them for promoting the event that Sheriff Mack and Bradlee Dean will be speaking at on December 1, 2021 at 5:30pm in Rapid City, South Dakota at the Grand Gateway Hotel. 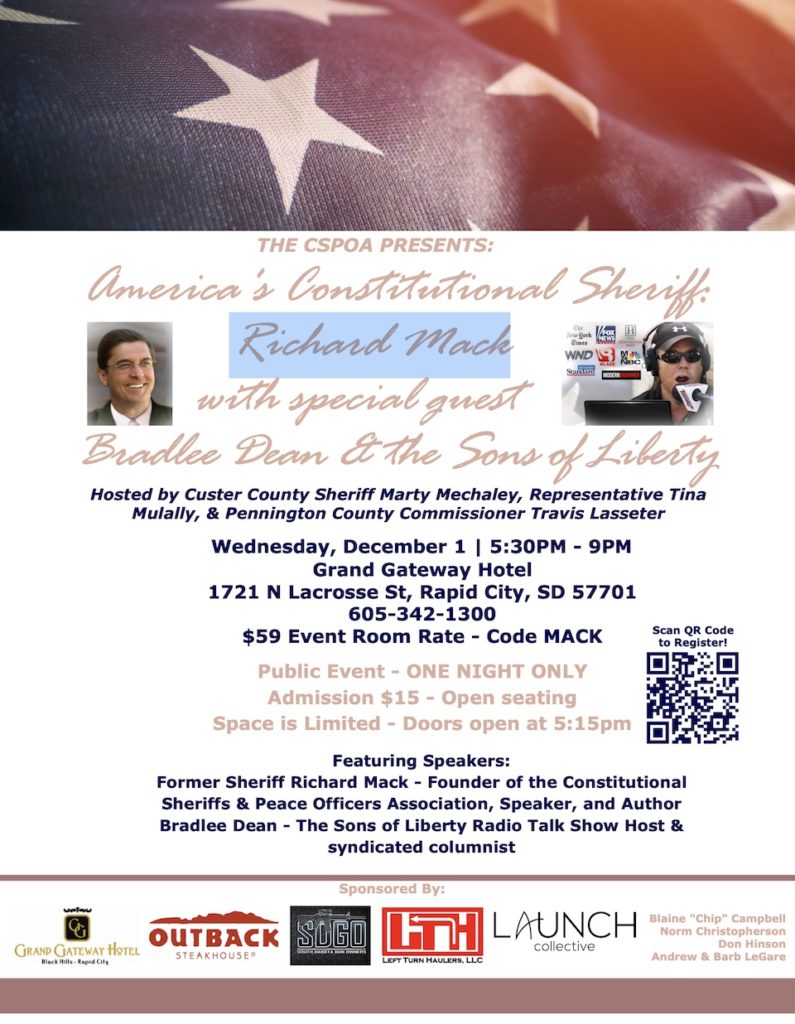 Former Graham County, Arizona, sheriff Richard Mack founded the “Constitutional Sheriffs and Peace Officers Association” and travels the country to peddle the unconstitutional and dangerous notions that local sheriffs can supersede the authority of Congress, the President, the Supreme Court, and even their own state governments. Mack disguises this insurrectionist sentiment as “training” for the cops he’s trying to indoctrinate and recruit into his unconstitutional movement:

The central tenet of CSPOA, borrowed from the anti-government extremist sovereign citizen movement, is that the county sheriff is the ultimate authority in the county, able to halt enforcement of any federal or state law or measure they deem unconstitutional. Mack, a former Arizona sheriff, has used this false narrative to oppose gun control laws and, in the last two years, to exploit anger and frustration over federal and state actions to combat COVID-19.

ADL is releasing this report today because we are especially alarmed that Mack is increasingly seeking out law enforcement audiences, billing his extremist events as “trainings.” In a disturbing development, in 2021, Mack won official state approval for his “trainings” in Montana and Texas, which allows attendees to receive continuing education credit for attending Mack’s events [Anti-Defamation League, “New ADL Report on Richard Mack and the CSPOA: Extremists Training, Recruiting Law Enforcement Nationwide,” 2021.10.06].

If you have to ask what’s wrong with local cops arrogating judicial power, you need to go back to civics class. You’ll hear this:

Mack says that more than 100 sheriffs have shown up at the annual conventions his group has organized, including many in 2014 where Finch received the group’s top honor: Constitutional Sheriff of the Year. With forty other sheriffs, Finch signed a resolution there declaring they would not tolerate any federal agent who attempted to register firearms, arrest someone, or seize property in their counties without their consent.

Jared Goldstein, professor of constitutional law at the Roger Williams University School of Law in Rhode Island, said this vow conflicts with the supremacy clause of the U.S. Constitution, which authorizes federal agents to enforce federal law even when it clashes with state or local laws. “What makes them dangerous,” Goldstein said in an interview, is that they want “the sheriffs to resist federal authority,” using phraseology that he contends leaves the door open for violence. In their stubborn resistance to federal authority, he added, they are like Kim Davis, the Kentucky clerk jailed last year for flouting the U.S. Supreme Court ruling granting gay couples the right to wed — “but with gu, ans” [Julia Harte and R. Jeffrey Smith, “‘The Army to Set Our Nation Free’,” Center for Public Integrity, updated 2016.05.24].

Mack’s movement has its roots in white-supremacist activism and domestic terrorism:

In the 1970s, a minister in the white supremacist Christian Identity movement, William Potter Gale, wrote a series of articles that would come to be known as the handbook of the Posse Comitatus movement. Gale described sheriffs as the only “legal” law enforcement officers in the country and urged citizens to form their own militias to resist encroachments on their rights if sheriffs did not. The constitutional abuses he cited included the federal income tax system, gun control, federal education, and civil rights laws. He advised citizens to form their own “common law” courts to try officials who violated the constitution, and prescribed archaic punishments, such as hangings.

Contemporary “sovereign citizens,” who generally reject federal authorities, are inspired partly by Gale’s rhetoric and partly by past bloody clashes between federal officials and citizens charged with illegal gun sales and ownership. Terry Nichols, who is now in prison for planning the Oklahoma City federal center bombing that killed 168 people and wounded more than 680 others this week 21 years ago, is a notorious member of the sovereign citizen movement, according to the FBI [Harte and Smith, 2016.05.24].

Now, I’ve interviewed Richard Mack and I’ve found him to point to the Constitution as the supreme law of the land that Congress, the President and all civil officers are to adhere to, which would mean that if they pass laws that are not in line with the Constitution, they are null and void.  On top of that, as the highest elected law enforcement officer in the county, he most certainly has the authority to not enforce and even interpose himself between the citizens who elected him and the state or federal agents that would seek to impose pretended legislation.

Additionally, the writer says you need a civics class if you have to ask, “what’s wrong with local cops arrogating judicial power“?  Actually, its the writer that needs a civics lesson.  Outside the courts, the only persons with judicial power are governors and the president, who may exercise  judicial powers, primarily to rectify judicial errors, grant pardons and reprieves from punishment.

Furthermore, because people from differing world views come to the same conclusion on a sheriff, that makes them equal in all things like white-supremacism activism and domestic terrorism?  There’s a serious logical disconnect with this one.

Bradlee Dean is another bigoted crank who, while playing chaplain one day in 2011 to the Minnesota House of Representatives, violated the chamber’s decorum by boosting the lie that President Barack Obama is not a Christian. That breach prompted Republican Speaker of the House Kurt Zellers to move to strike Dean’s name from the House journal and vow never to let Dean or liars like him onto the House floor:

“I know this is a non-denominational prayer in this chamber and it’s not about the Baptists and it’s not about the Catholics alone or the Lutherans or the Wesleyans,” Dean said in his invocation in the Minnesota House. “Or the Presbyterians, the evangelicals or any other denomination, but rather the head of the denomination and his name is Jesus. As every President up until 2008 has acknowledged. And we pray it. In Jesus’ name.”

Zellers, R- Maple Grove, restarted the House session and brought in a chaplain to redo the prayer. He also condemned Dean’s prayer in a floor statement.

“Members, I can only ask for your forgiveness. That type of person will never ever be allowed on this House floor again as long as I have the honor of serving as speaker,” Zellers said [Tyrese Griffin, “Fallout Continues over Anti-Gay Minister’s Prayer at Minnesota Capitol,” Washington Independent, 2011.05.23].

So, anyone that took the time to know Bradlee Dean would know he is not a bigot.  He is a preacher of the Gospel of Jesus Christ that calls men to repent of sin towards God and put faith in the Lord Jesus Christ.  He welcomes anyone to hear that message and, in fact, will preach it to you even if you don’t want to hear it.

Additionally, DFP claims that Dean somehow violated “chamber’s decorum” and said that Dean boosted the lie, which is actually the truth, that Barack Hussein Obama Soetoro Sobarkah is not a Christian.

Here’s what Dean specifically stated in his prayer:

“This chamber it’s not about the Baptist is not about the Catholics alone or the Lutheran’s or the Westlands or the Presbyterians evangelicals or any other denomination but rather the head of the denomination and his name is Jesus as every president up until two thousand eight has acknowledged and we pray it in Jesus’ name.”

In fact, Obama stated we were not a Christian country, too.  However, the pansies in the Minnesota state House brought in their chaplain, a wimpy, soft, emasculated man to offer a prayer more in line with those unwilling to acknowledge the One, true and living God.  Take a look at their pathetic little “concerns” and then the most ecumenical prayer given that you’ve ever heard.

Take a listen to this pathetic prayer.

All three of the effeminate men above are why we are in the mess we are in today.  We need real men willing to speak the truth and do the right thing rather than seek men out to appease them.

I truly hope Cory Allen Heidelberger would repent and have the courage to go and report from the event and address the men to their faces with the same rhetoric used in the DFP article, but I’m sure this person is probably, as a friend says, “curled up the fetal position, in a safe space in his momma’s basement.”

Nevertheless, if you are in the area, please stop by and meet Richard Mack and Bradlee Dean, and if you believe at Heidelberger does, feel free to engage them in dialogue.  They welcome the challenge!

In conclusion, The Sons of Liberty would like to thank DFP for helping us get the word out about the event so you can come and hear just what these men stand for yourself.