Florida: “Constitutional” “Republicans” To Turn Out In “Support” & “Honor” Of A Documented Felon Who Wanted His Own Child Murdered

As we move into the 2020 election season, most people have their eyes glued on the dog and pony show WWE bout in DC and who will be president.  Some will be closely watching House and Senate races, and others, who in my opinion are much wiser, will be eyeing local and state elections.  With that in mind, in Lee County Florida, it is ironic that on September 12, there will be several “Republicans” who are designated as “Constitutional” who will be turning out for a reception to honor Lee County Sheriff Carmine Marceno, a man that, according to Florida law, impersonated a police officer for  over a decade, used a public website to perpetrate a fraud on the people of Lee County concerning his education, abused his position as sheriff to pursue a crime victim for sex and when he impregnated her, demanded she murder their unborn child.

I hope you are able to join me in support of our current Lee County Sheriff, Carmine Marceno, this Thursday at Pinchers.

The reception in his honor will begin at 5:30pm, I look forward to having you there. 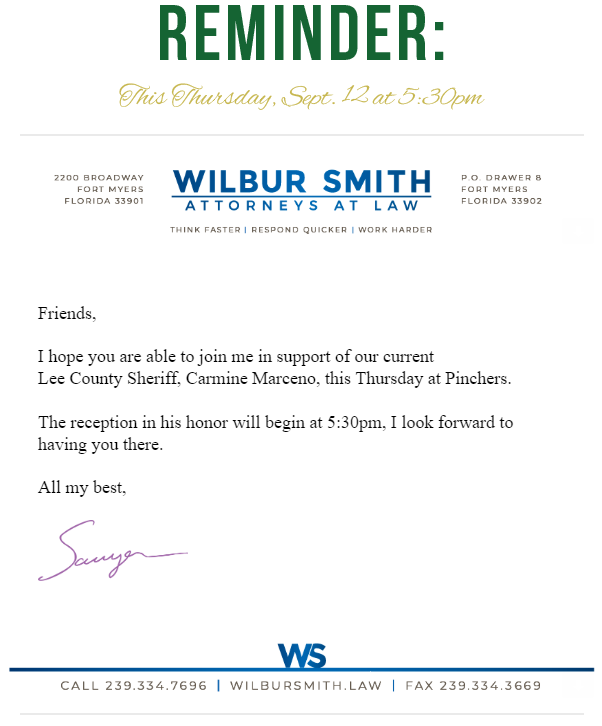 So these people want others to “honor” and “support” a documented criminal, fraud, liar and womanizer.  Stop and think about that, and remember, we aren’t talking about Democrats here.

The reception is nothing more than an event to raise money for Marceno’s election campaign.  Marceno was never elected by the people, but was appointed by former Florida Governor Rick Scott, who also claims to be a “Republican.”

However, it seems that many of these people who are referred to as “Constitutional” hosts have no problem supporting and “honoring” a man that we have documented has engaged in unethical and even criminal behavior prior to his appointment as sheriff and as sheriff.

Among these people who are listed as “Constitutional Hosts” for the event are: 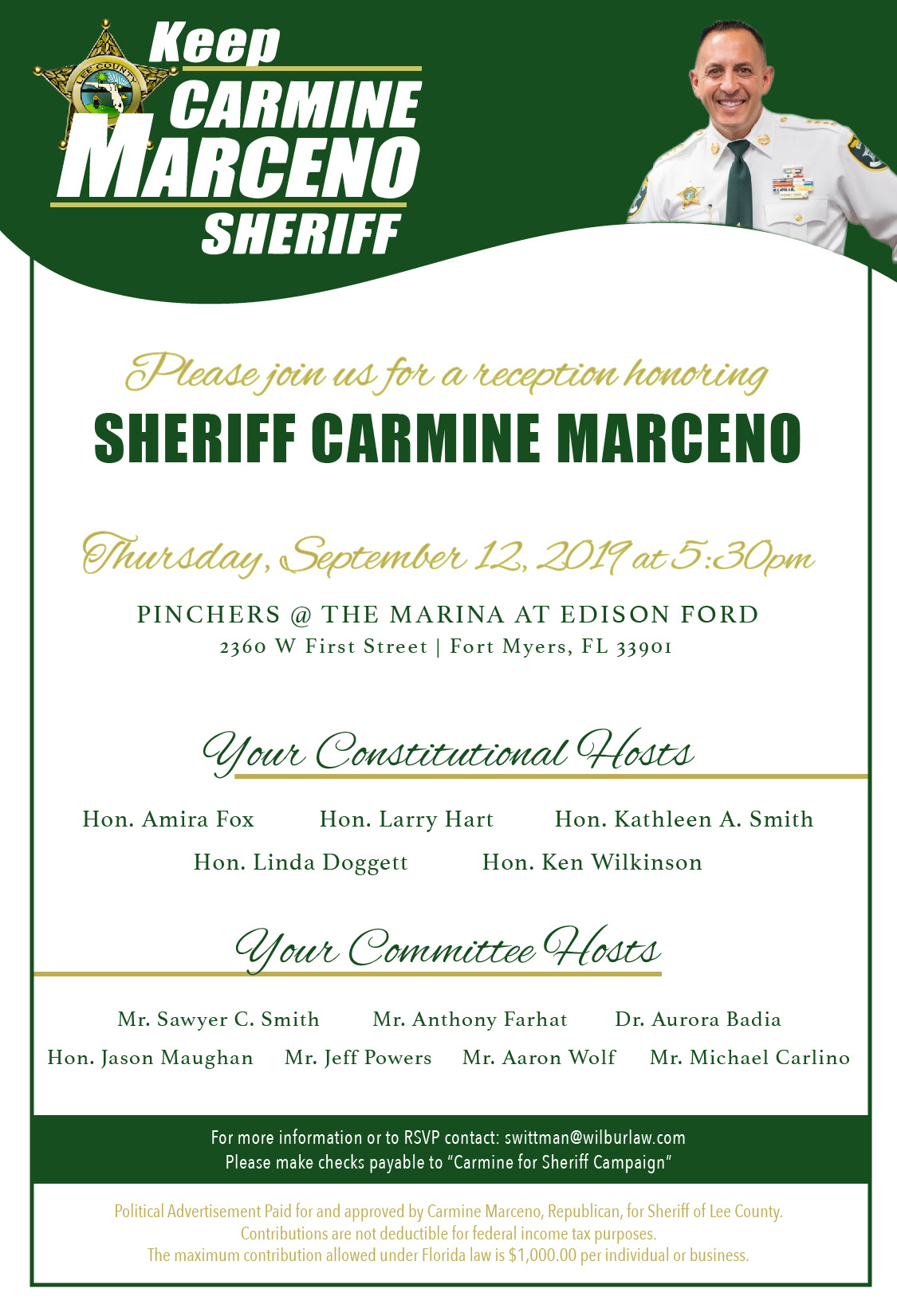 Of course, all of these claim to be “good Republicans,” but if that is the case, why are they supporting Marceno, a man whom I have documented to be a fraud and criminal?  Here’s the evidence:

I have covered Marceno extensively, along with the story of Deanna Williams and people need to understand that what happened to Ms. Williams as a result of Marceno being in a position in a sheriff’s office is the direct result of him never meeting the state’s lawful requirements to take an Equivalency of Training test to be a police officer.  He simply was impersonating one up until the time of his appointment.

However, mark the names of those who are “constitutional hosts” and realize they are rubbing shoulders with what Florida law states is a “felon.”  They are embracing and honoring and giving money to the candidacy of a known liar and fraud, as well as a womanizer, who due to his unethical pursuit of Ms. Williams caused her to not receive justice in a $200,000 grand theft complaint.

Ms. Williams continues to need support via her GoFundMe page due to the thefts of her attorneys, the injustices committed by Sheriff Carmine Marceno and the State Attorney’s Office and Ft. Lauderdale attorney Scott Mager, which can by reach by clicking here.

Marceno is part of the problem of injustice in Lee County, but of course, the irony is that Marceno’s office was charged with arresting a Ft. Myers police captain this week for prostitution and perjury.  However, Marceno has never denied the allegations against him because to do so under oath in an investigation would place in roughly the same position.  Instead, Marceno has attacked his political opponents.  Why?  Isn’t it obvious?

In fact, Marceno and the woman he seems to best friends with, State Attorney Amira Fox, both dropped the ball when it came to getting justice for Ms. Williams.

Perhaps though, the truth about Amira Fox Dijani is that her family is tied to Islamic terrorists in the Palestinian Liberation Organization (PLO) and her father dedicated a book about it to her and she received campaign funds from it.

This is thoroughly documented, as well.

Fox’s husband also seems to be coincidentally dialed in to what is going on, especially in the case of Deanna Williams.  After Williams couldn’t get justice from Lee County Sheriff’s Office or the State Attorney’s Office, she turned to the Florida Bar to file a complaint about the theft of her money and attorney Scott Mager who is currently and knowingly in possession of $300,000 in stolen funds from Ms. Williams.  In doing so, she was assigned none other than Mike Fox to help her with her complaint.  Mike Fox just happens to be Amira’s husband and when Ms. Williams asked him if he knew Carmine Marceno, he told her he did not until she reminded him of a very specific phone conversation she heard with Carmine.  He then retracted and said he knew him.

Fox seems to be pretty much a do nothing state attorney like former state attorney Steven Russell, who sued a local outlet for telling the truth about his terrible record in prosecuting crime in the area, only to have it tossed out.

One wonders if the others in this list might have a few issues that they are being helped in by the corrupt sheriff and so they are throwing their support behind him for that reason.  In any case, there are others involved.

This event is being put on by Wilbur Smith – Attorneys at law in Ft. Myers.

Additionally, there are committee hosts:

The reception is scheduled for:

One wonders if anyone in the Southwest Florida media is going to actually show up and ask some serious questions of Marceno and those supporting him.  I’m rather doubtful that will occur, but one can always hope.  Till then, just keep in mind that former Lee County Sheriff Rod Shoap has submitted a letter to the governor concerning Marceno’s lack of lawful credentials to have been a police officer in the state, as well as an ethics complaint concerning Ms. Williams complaint against Marceno, which FDLE didn’t really investigate and the Southwest Florida media simply ignored.

For documentation of all I have mentioned, here are the previous articles in this series.

Don't forget to like SonsOfLibertyMedia.com on Facebook and Twitter.
The opinions expressed in each article are the opinions of the author alone and do not necessarily reflect those of SonsOfLibertyMedia.com.
Previous Post:
The Dancing Israelis: The Forgotten Documented Element Of 9/11
Next Post:
Tennessee: Multiple Cops Fired For Exposing Illegal Quota System Forcing Officers To Make Arrests

The Decline And Fall Of The Western Empire
August 11th, 2022 Sons of Liberty Media