Well, it looks like the truckers in Canada may just get the last laugh after a judge ruled in their favor that their protest was completely legal.  On top of that, it appears they will be suing the City of Ottawa.

The story comes from Farmers Forum.

MONTREAL — The Canadian government trampled on fundamental human rights with its COVID restrictions, then overreached on dealing with the Freedom Convoy and must now answer to numerous lawsuits, including one by a former premier, says a well-respected constitutional lawyer.

Speaking on Montreal lawyer Viva Frei’s Youtube channel on March 25, Keith Wilson noted that the mischief charges against his client and convoy leader Tamara Lich, will not be successful. She counselled truckers to move in order to comply with police demands, not to block emergency lanes, he said.

Wilson is also a lawyer for former Newfoundland Premier Brian Peckford, who is suing the federal government for breaching the charter of rights by preventing unvaccinated people from leaving the country or getting on a bus, train or ship.
“Obviously we are going to be able to establish Charter breaches,” Wilson said, adding that the government restricted mobility, security of the person and freedom of conscience.”

Wilson said he would not be able to live with himself if he hadn’t helped the Freedom Convoy when he got the call for help from the Justice Centre for Constitutional Freedoms on Feb. 1.

Wilson also clarified that the Freedom Convoy protest was not illegal at any point, even though Prime Minister Trudeau called it illegal, and big media went along with it.

In fact, an Ontario superior court judge sided with the convoy. When an injunction against honking horns was declared, the court also stated that “provided the terms of this Order are complied with, the defendants and other persons remain at liberty to engage in a peaceful, lawful and safe protest.”

Reality on the ground was often not being reported. While Ottawa police often announced they had made a number of arrests during the Freedom Convoy protests, they never mentioned that many incidents were called in by truckers after people slit their tires or cut gas lines, Wilson said. Police also negotiated with truckers as to which streets they would be allowed to block during the protest. When things heated up, the police blocked off Laurier Avenue to prevent east-west traffic flow even though there was not one truck or protest vehicle on that street.

The attorney general’s reason for freezing bank accounts was based on an affidavit by a police officer who based his testimony on what he read in the news, Wilson said, adding that courts don’t rely on third-party hearsay. “It’s that ridiculous. We ran into this problem of circularity all the time, of media saying something, police then saying, well the news is saying it, then the media saying, well the police said it.”

Wilson is already seeing some early confirmation that the truckers and their supporters have been slandered. Barry MacKillop, deputy-director of FINTRAC, the federal organization that goes after terrorism funds and criminal money-laundering, told the Commons finance committee that there was not a shred of illegal activity associated with the trucker convoy.

Said MacKillop: “There were people around the world who were fed up with COVID and were upset and saw the demonstrations. I believe they just wanted to support the cause. It was their own money. It wasn’t money that funded terrorism or was in any way money laundering.”

Wilson said that there was nothing to justify using the Federal Emergencies Act. “This is government writing a blank cheque over your rights and your life… this was a retaliatory measure by an authoritarian petulant child prime minster lashing out.”

Below is the court order. 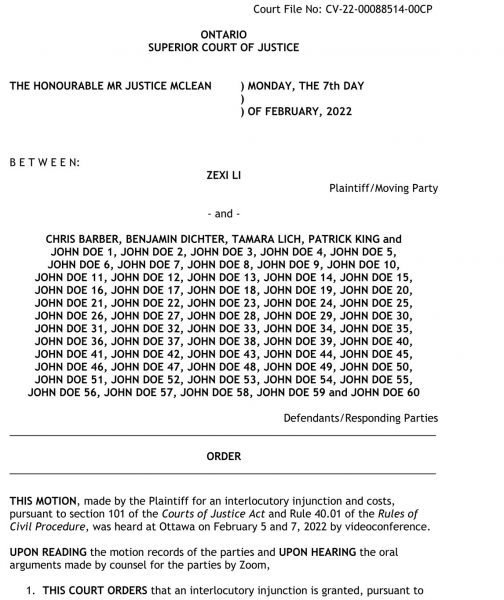 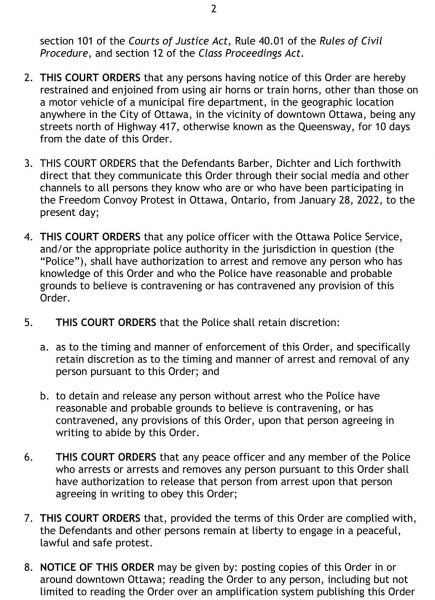 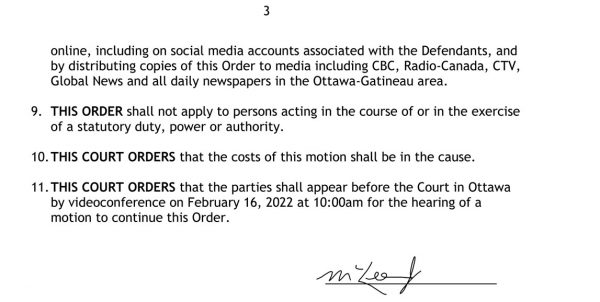 Remember Pastor Artur Pawlowski’s words to the truckers back in February?  He exhorted them to hold the line because they had power and they would win the day.  If you don’t remember, let me remind you.

Pawlowski warned just after this that the people would be coming for the corrupt politicians and cops.

Days later, Artur would be arrested at his home, but the people would hold the line in the face of brutal tyranny against them by the Trudeau regime.

Don't forget to like SonsOfLibertyMedia.com on Facebook and Twitter.
The opinions expressed in each article are the opinions of the author alone and do not necessarily reflect those of SonsOfLibertyMedia.com.
Previous Post:
Months Before COVID Was Know To Exist, DoD Awarded Contract For “COVID-19 Research” In Ukraine
Next Post:
How The Second Biggest Selling Book Of All Time Is Being Manipulated Politically (Video)