It appears that there are now three investigations that have been launched to deal with the fraud and unethical conduct of Lee County Sheriff Carmine Marceno, and the latest two are coming by way of the Office of Executive Investigations (OEI) and the Bureau of Standards.

In a letter dated October 4, 2019, addressed to former Lee County Sheriff Rodney Shoap from Florida Department of Law Enforcement (FDLE) Director Scott McInerney, FDLE informed Shoap that an inquiry had been launched due to his complaint dated at the end of September.

The letter indicates that Shoap’s complaint letter was forward by FDLE to the Office of Executive Investigations for review.

“In your letter, you alleged, in part, possible fraud / untruthfulness associated with Carmine Marceno’s employment application and equivalency of training form, ” McInerney wrote.

“The OEI had previously received information regarding your allegations / concerns and is currently conducting a review / inquiry into the matter,” the letter continues.

The letter concludes by stating, “Additionally, on the issues related to officer certification, the OEI coordinates with the Bureau of Standards, who is responsible for ensuring that agencies and criminal justice 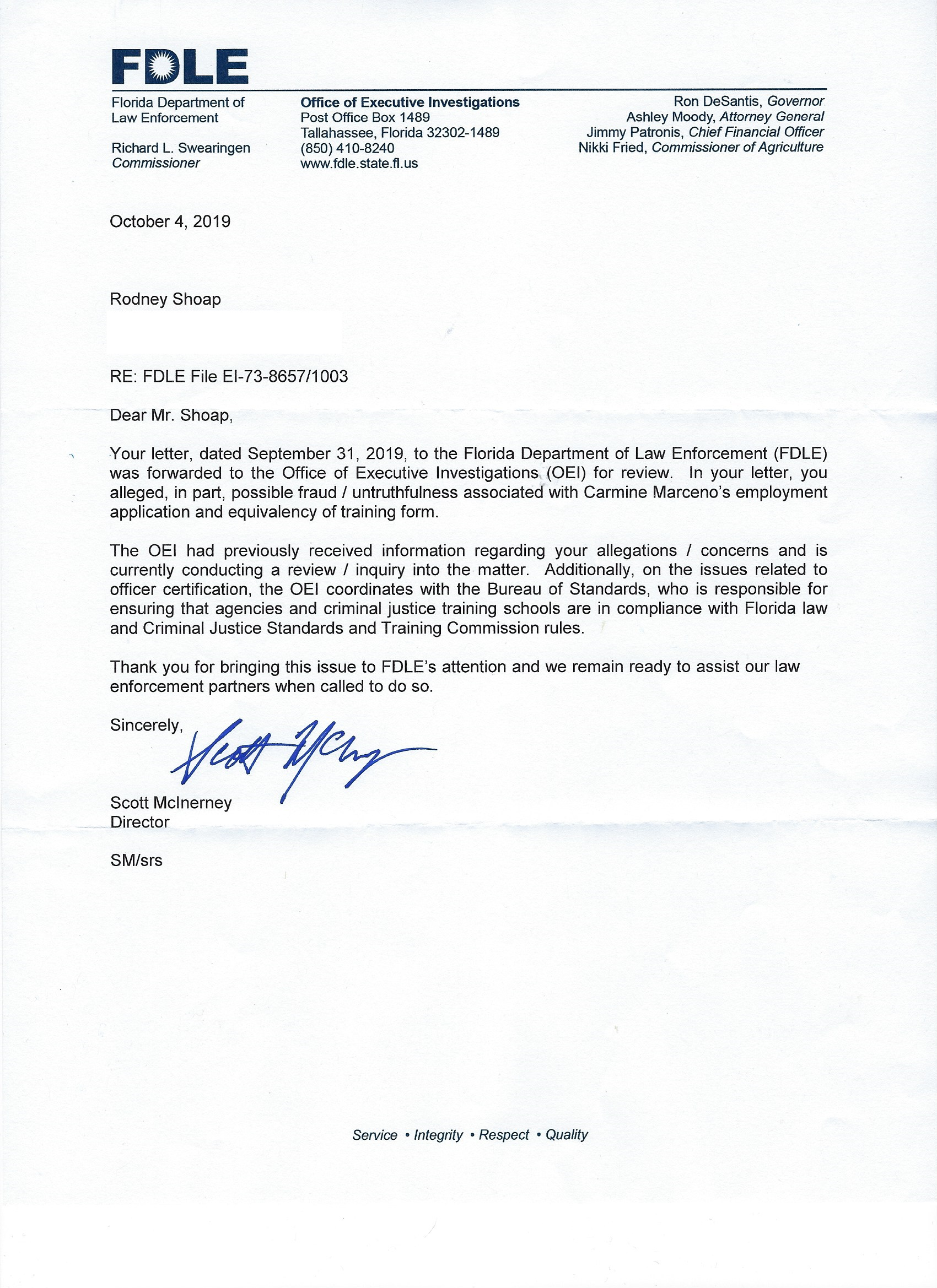 training schools are in compliance with Florida law and Criminal Justice Standards and Training Commission rules.”

Sheriff Shoap told Sons of Liberty Media that while state law prohibits these agencies from confirming an investigation is actually taking place, there is clearly an investigation file number, EI-73-8657/1003.

It appears that not only has the OEI opened up an investigation, but calls to the governor’s office for a response to the matter, are directed to FDLE, which is also quite telling.

In addition, it seems that it is clear that CJSTC will also be forced to open an investigation into the matter to determine the claims of fraud against Marceno to illegally take the Equivalency of Training test and the unlawfully obtain his certification.

The investigations are opening up due to the tireless efforts of former Lee County Sheriff Rodney Shoap.

Shoap has written several letters, including to the governor’s office concerning this matter and Marceno’s abuse of his office to target a vulnerable crime victim with multiple sclerosis, Deanna Williams.

Not only did Marceno fail to help Williams concerning her criminal complaint against her attorney for grand theft of $200,000, but he lost important documents concerning that case, which you can hear him admit to in a voicemail recording.

To top it off, Marceno also engaged in sex with Ms. Williams in his taxpayer-funded vehicle, which is against ethics standards on FDLE’s own website.  He impregnated her and demanded that she murder their unborn child so the child wouldn’t “ruin his career.”  Can you imagine?

This is all documented in text messages.  Yet, people in Lee Count continue to support this man under a Republican banner, especially many of the corrupt politicians in Lee County.

On top of that, it is alleged that people tied to the sheriff are engaged in an active smear campaign against Ms. Williams, claiming she was never pregnant.  However, not only does she present a pregnancy test, which Marceno clearly seems to think is his child, but investigative journalist David DiCrecenzo has visited Ms. Williams on many occasions and attests to the fact that back in February, she was “very pregnant.”  Family members also attest to the pregnancy and there are several pictures on Ms. Williams‘ Facebook page that clearly indicate her pregnancy.

Sadly, her child was stillborn due to a complicated pregnancy that was that put her and her child more at risk due to the conduct of the sheriff and the Lee County judicial system, including Judge James Shenko, who signed a writ of bodily attachment at the request of Ft. Lauderdale attorney Scott Mager of Mager-Paruas, which he knew would pressure Ms. Williams into working with him to sue her former attorney Gloria Allred for a substantial amount of money, knowing that Marceno would be the one to arrest her.  This took place during Ms. William‘s final trimester and the stress was too great for her baby to overcome.

A Bar complaint has been filed against Scott Mager, and he has filed court documents in an attempt to cover the fact that he is knowingly in possession of $300,000 of Ms. Williams money, which has crippled her in her pursuit of justice, not to mention caused her to lose everything she has.  If you are able to aid Ms. Williams, she has a GoFundMe page, and that is all she has to survive on.

Additionally, US Senator Rick Scott has been urged by Sheriff Shoap to not endorse Marceno due to his behavior and fraud.

An investigation has already been launched against Marceno concerning the above-mentioned account with Ms. Williams by the Florida Commission on Ethics.

Sadly, for the most part, Southwest Florida media continues to remain silent about this man.

Don't forget to like SonsOfLibertyMedia.com on Facebook and Twitter.
The opinions expressed in each article are the opinions of the author alone and do not necessarily reflect those of SonsOfLibertyMedia.com.
Previous Post:
Ukraine “Investigation” Perfectly Illustrates Dumbing Down Of America
Next Post:
“Gamers For Freedom”: Protest Organized Against Blizzard – Human Rights Organization Gets Involved In Controversy