As I’ve already given away in the title, America is first and it’s not even that close. 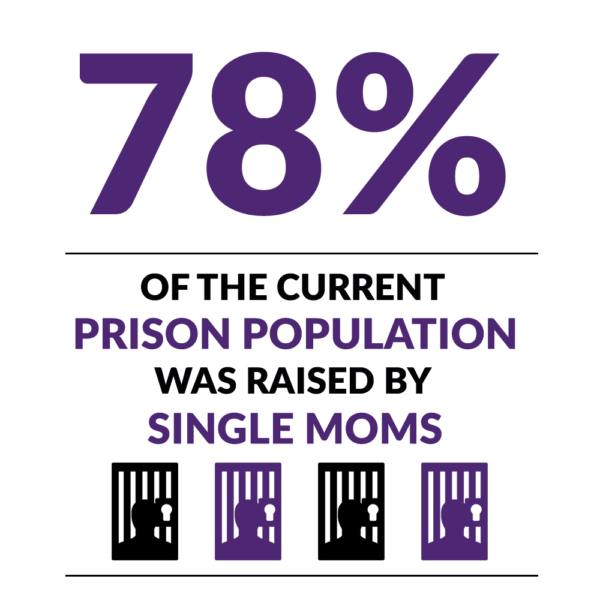 The United States tops the world when it comes to raising children in single parent households.

While there’s been great economic growth the US has an epidemic with parents not staying together and raising their kids. While many kids are born out of wedlock over 70% of divorces in America are initiated by the wife.

FOR DECADES, THE SHARE OF U.S. CHILDREN LIVING WITH A SINGLE PARENT HAS BEEN RISING, ACCOMPANIED BY A DECLINE IN MARRIAGE RATES AND A RISE IN BIRTHS OUTSIDE OF MARRIAGE. A NEW PEW RESEARCH CENTER STUDY OF 130 COUNTRIES AND TERRITORIES SHOWS THAT THE U.S. HAS THE WORLD’S HIGHEST RATE OF CHILDREN LIVING IN SINGLE-PARENT HOUSEHOLDS.

ALMOST A QUARTER OF U.S. CHILDREN UNDER THE AGE OF 18 LIVE WITH ONE PARENT AND NO OTHER ADULTS (23%), MORE THAN THREE TIMES THE SHARE OF CHILDREN AROUND THE WORLD WHO DO SO (7%). THE STUDY, WHICH ANALYZED HOW PEOPLE’S LIVING ARRANGEMENTS DIFFER BY RELIGION, ALSO FOUND THAT U.S. CHILDREN FROM CHRISTIAN AND RELIGIOUSLY UNAFFILIATED FAMILIES ARE ABOUT EQUALLY LIKELY TO LIVE IN THIS TYPE OF ARRANGEMENT. 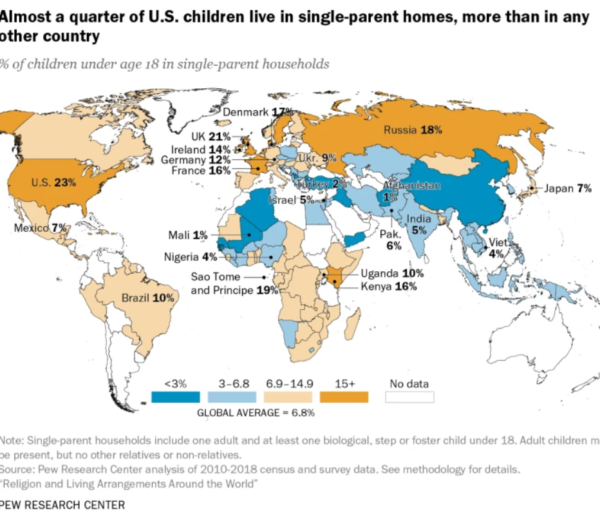 Why is this a big deal?

Is it simple morality?

More so it is the effect of moral depravity by kids growing up without Fathers.

Here is some additional commentary and stats from The Fatherless Generation:

Father Factor in Education – Fatherless children are twice as likely to drop out of school.

Father Factor in Incarceration – Even after controlling for income, youths in father-absent households still had significantly higher odds of incarceration than those in mother-father families. Youths who never had a father in the household experienced the highest odds. A 2002 Department of Justice survey of 7,000 inmates revealed that 39% of jail inmates lived in mother-only households. Approximately forty-six percent of jail inmates in 2002 had a previously incarcerated family member. One-fifth experienced a father in prison or jail.

Father Factor in Crime – A study of 109 juvenile offenders indicated that family structure significantly predicts delinquency. Adolescents, particularly boys, in single-parent families were at higher risk of status, property and person delinquencies. Moreover, students attending schools with a high proportion of children of single parents are also at risk. A study of 13,986 women in prison showed that more than half grew up without their father. Forty-two percent grew up in a single-mother household and sixteen percent lived with neither parent.

Raising children without Fathers (or Mothers) is happening too much in this country and, thus, we are contributing to our own destruction.

This has to stop America.

“THE STRONGEST PREDICTOR OF WHETHER A PERSON WILL END UP IN PRISON, IS THAT THEY WERE RAISED BY A SINGLE PARENT”. C.C. HARPER AND S.S. MCLANAHAN, “FATHER ABSENCE AND YOUTH INCARCERATION”, PAPER PRESENTED AT THE ANNUAL MEETING OF THE AMERICAN SOCIOLOGICAL ASSOC., SAN FRANCISCO, CA, 1998

Don't forget to like SonsOfLibertyMedia.com on Facebook and Twitter.
The opinions expressed in each article are the opinions of the author alone and do not necessarily reflect those of SonsOfLibertyMedia.com.
Previous Post:
How the Clowns In The Circus Of Politics Keep The Show Going-When Will Americans Learn? (Video)
Next Post:
When It Came To Investigating The Infiltration Of Islamists In Our Government, They Were Stymied